The Sectional Self – Intersectionality and why it matters 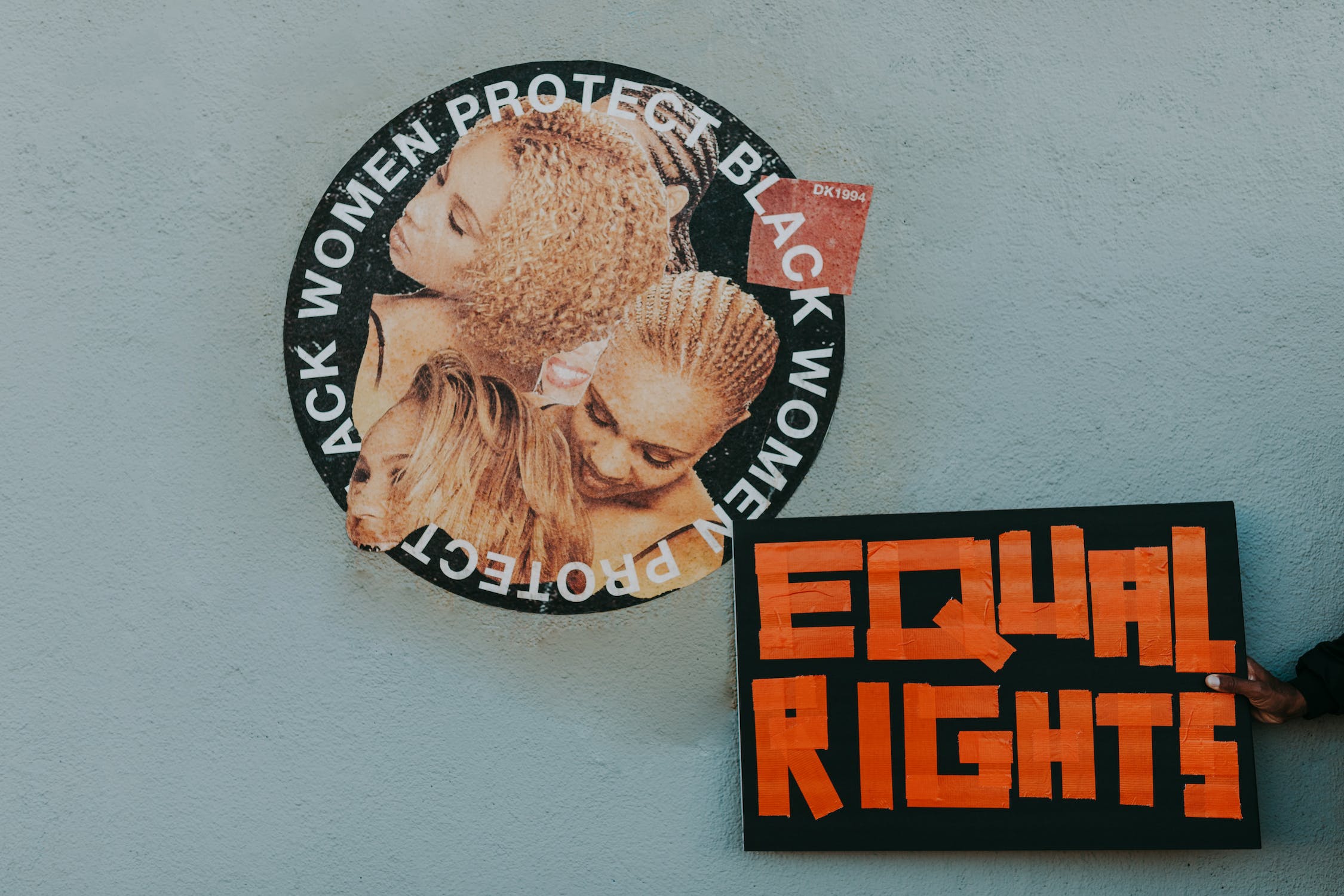 INTERSECTIONALITY MEANS A LOT TO ME. IT'S BECOME THE DRUM I BANG ON IN POLITE AND NOT SO POLITE COMPANY. IT'S A USEFUL WAY TO INTERPRET AND CRITICALLY ANALYZE CULTURE, ART, AND LITERATURE. INTERSECTIONALITY SHAPES OUR IDENTITIES. FUNDAMENTALLY, IT HAS BECOME MY 'DEFAULT' WAY OF LOOKING AT THE WORLD.

An image search on Google for the term ‘Human Being’ conjures surprising results. There are countless stock photos of men and women – all under the age of forty, all white and all able-bodied. If Google deems this to be the quintessential definition of a human being, then we’ve got a lot to talk about. And I mean A Lot. Of course, my first question is ‘who’s missing?’

The image of the ‘Vitruvian Man’ is Leonardo Da Vinci’s illustration of ‘ideal’ human proportions (Da Vinci based his drawing on a description by the Roman architect Vitruvius) – eight heads high, a proportionate ‘ideal’ for artists and writers alike – it illustrates an ‘ideal’ that few measure up to.

Google images seemingly suffers from a Vitruvian hangover, but the rest of the world must have abandoned this ‘default’ back in the Renaissance along with witch-burning and bubonic plague? Unfortunately, not. Outside of the ‘default’ position can seem like a cold and scary place, literally. In 2015 The Daily Telegraph ran a report on how women are not the ‘default’ when Air Conditioning units are designed, installed, or used. This article exposed how climate controls in offices are based on the resting metabolic rate of a 40-year-old male – a metabolic rate that runs up to 30% faster than a woman’s – rendering men comfortable in their workspaces but leaving women (who would need conditions to be approximately 4 degrees warmer, based on this 30% lag) wrapped up in Christmas jumpers in the middle of summer. So if it feels like a constant battle for the thermostat controls then it probably is - a battle between biology and what the perceived ‘default’ is by standards of Air Con companies.

If Vitruvius wrote about architecture and Da Vinci used the Vitruvian man as a template to help him with proportions, can the ‘default’ be reorganized to recognize the difference? Ron Mace, the American architect, coined the term ‘Universal Design’ to include people with disabilities in architectural decisions and usage. Mace’s position as a tetraplegic architect, who spent most of his life in a wheelchair after contracting polio at the age of nine, highlighted the idea that physical accessibility was not possible when we view the world from the ‘norm’ of Vitruvian architecture, reinforced by Da Vinci’s summary. How does the Vitruvian man view the world from a seating position? How is his accessibility catered for? How is his voice heard? Mace addressed all of these issues and shifted the ‘default’ to cater to more than just the able-bodied.

The problem with this word, ‘default’ is that it’s often misunderstood for being ‘universal’ when it’s not. American novelist, John Cheever famously stated that the role of the American writer was not to describe the drama of women in a personal and individualistic sense but to document the masculine worlds of sports, ceremony, and public. Cheever was described as the ‘Chekhov of the Suburbs’ by many of his contemporaries and critics – bestowing the accolade that his voice was universal and ‘of the people’, when his attitudes clearly were not. Cheever’s views recognized that women can exist but concluded that they lack universality and, even though women make up a little over 50% of the population, are not considered ‘default’ by Cheever’s standards.

Being outside the norm renders individuals as less visible. In 2017, the BBC published a list of their highest-paid stars on radio and television. The top six names (in no particular order) were: Chris Evans, Gary Lineker, Graham Norton, Huw Edwards, Steve Wright, and Jeremy Vine. These white men played a multitude of roles, from sports commentators to TV personalities but the reality of these highest paid voices is that penetration into this field is almost impossible. Newer, and more diverse individuals are unable to break through the white male ceiling thanks to its historical, cultural, and social legacy. So, why does that matter? Marian Wright Edelman, children’s rights activist says: “You can’t be what you can’t see,” leaving a huge diversity gap of systematically unrecognized and ignored voices, influences, and narratives.

Positionality is the idea that personal values, views, and location in time and space impacts how we interpret the world around us. Taking this into consideration, gender, race, class and other aspects of our identities become indicators of our social positions and are not fixed and given, but fluid and malleable. Our positionality reacts to the knowledge we have about things, both material and abstract so knowledge itself is the product of a particular position that reflects particular spaces and places. For example, if we suddenly find ourselves as the single woman in the Air Con office, surrounded by 40 something-year-old men who keep the thermostat at icebox temperatures, we might get complained at for asking to turn the heating up. We didn’t know this was the exact right temperature for that time and space. We didn’t know that ‘bloody freezing’ was an acceptable workplace temperature.

The Intersecting Axis of Privilege, Dominion and Oppression was published in 1996. It’s a little outdated, doesn’t note Trans issues, mental health issues and lacks on the Sophie Lancaster Goth prejudice front - however, it’s a good place to begin understanding the concepts of Privilege and Oppression and Intersectionality as a major factor. It allows the individual to plot their own personal position and to see how society and culture could objectively view them. I tried it out on myself, sulked for a bit at my results, screamed inside when I compared results with colleagues. I had a personal moan when my partner said I should be ‘proud’ that I’d managed to accomplish ‘so much’ with this societal oppression weighed against me. I felt a little better when my wonderful students also subjected themselves to the test and concluded that it’s not a massive F-U to the factors of oppression but a way to recognize how we could make life a little better for EVERYBODY, not just those who suffer oppression or those who recognize their privilege. Nothing is taken away by recognizing and leveling the playing field. Nothing is removed by making Ghostbusters female, nobody should feel challenged that Dr. Who has taken on a female form; nobody should get upset about Hermonie Granger being played by a black actress in the West End stage play. If anything we should be asking for much, much more.

Kimberle Crenshaw offers a good definition of Intersectionality when she states that it’s a metaphor for understanding how the multiple forms of disadvantage and inequality sometimes compound themselves and create obstacles that are often not understood within conventional ways of thinking about social justice. Her idea that outcomes are impossible to change without understanding how they’ve come about resonates with both Feminism and Intersectionality, alike. Rather than a grand theory, Intersectionality is more of a prism for understanding why society has certain problems. Akala’s 2019 memoir, Natives: Race and Class in the Ruins of Empire examines the rapper and hip-hop artist’s identity concerning cultural and historical legacies. The book examines his relationship with Camden in London, how his identity was formed by his relationship with black Windrush generation men, how his ambitions were defined by the representations of black male celebrities of the 1980s, how visiting Jamaica challenged what he thought about identity within the context of historical and cultural forces and how growing up with a mixture of heritages makes him who and what he is. Crenshaw asks how stereotypes can play out within certain situations to provide equal opportunities for individuals navigating societal systems and structures. Identity becomes more than a single unit but a multi-layered relationship between people and history, community, and institutions. But it becomes a paradox. When you’re outside of the default, you and your viewpoints are less visible in the dominant culture and your differences make you stand out.

Often, I wonder why I wrote my undergraduate dissertation in English on Ian McEwan, one of the UK's leading white male, middle class, able-bodied, neurotypical, Cis-het writers? Well, there were many factors at play – I studied at a 1994 group university (a university that was research-focused but too small to be considered a Russell Group university) which specialized in canonical literature. Consequently, I only remember studying a handful of female writers, two LGBTQ writers, two non-white writers, and no disabled writers out of the hundred named authors on the syllabus. Anything that ventured too far from ‘default’ became difficult to get an advisor; anything that deviated from the canon became too difficult to research, anything for an easy life. If we imagined this reversed, perhaps the worlds and the culture produced could be very different places? Maybe GCSE syllabuses would become more reflective of the population in the classrooms, rather than a predominance of Wilfred Owen, Shakespeare, and Dickens? Perhaps more writers like Raymond Antrobus, the deaf, mixed-race poet who ‘wrote back’ to Ted Hughes’s poem ‘The Deaf School’ – criticizing Hughes for his condescending use of language – could be studied to allow thinking, discussions, and a vibrant and relevant love of poetry to emerge? Perhaps we could inspire the next generation of poets? Perhaps they could reset the ‘default’?

I write a racially diverse cast of characters in all of my works – but I’ll tell you a little secret. They don’t start off this way. I still think in modes of ‘default’, it’s seeped in. From the canon of literature studied at university, from the predominance of white narratives on television and the positioning of ‘default’ as being both universal and highbrow. Which is incredibly weird as a mixed-race, female writer. I write ‘default’ casts as sketches and add their intersectional qualities through rewriting, editing, and developing character voices. ‘Default’ is useful, it’s a blank canvas, a bare wall where the interesting parts can be added, molded, shaped, and creatively enhanced to provide stories that contain intersectional characters moving within the ‘default’ world(s) of the accepted norms. So like Leonardo Da Vinci, it has a purpose – an empty pallet, a blank sheet of paper, a bare summary – but should never be used as a benchmark for definition. Especially not when people, society, history, and social justice are concerned.