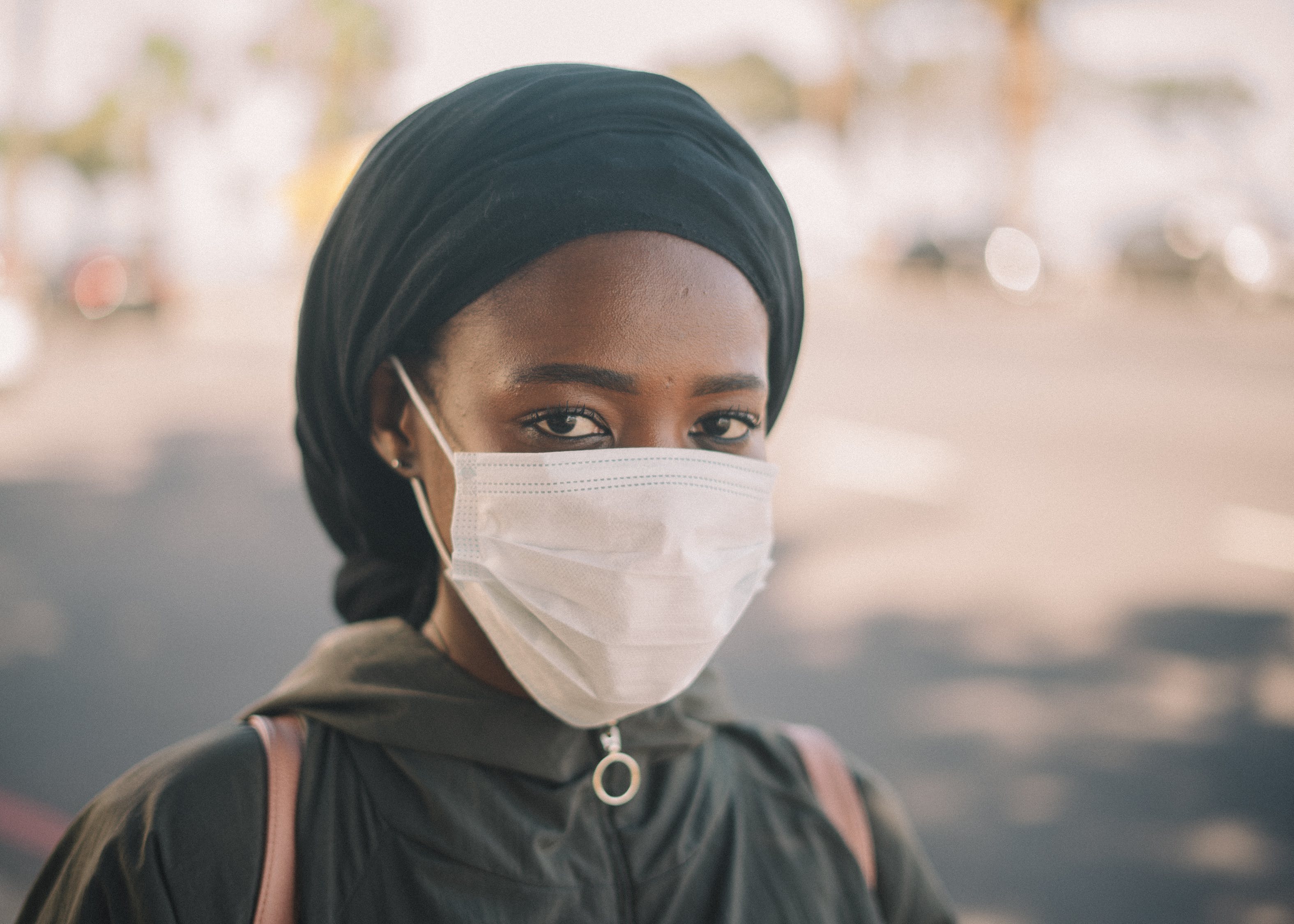 LEICESTER'S CULTURAL DIVERSITY MAKES FOR A VIBRANT AND TOLERANT CULTURAL COMMUNITY. HOWEVER, IT BECOMES A WEAPONIZED REASON WHY COVID-19 - A DISEASE THAT HAS AFFECTED PEOPLE OF COLOUR MORE DISPROPORTIONATELY - TOOK SUCH A SAVAGE HOLD IN THIS SMALL MIDLANDS TOWN.

Like the rest of the UK, the small city of Leicester was enduring all of the COVID-19 restrictions. Schools, restaurants, bars, non-essential shops, gyms, and swimming pools all were closed; employees were working from home where possible, and strict social distancing measures were instituted. Being a resident of the city of Leicester, United Kingdom, I saw and felt all of this happen around me and to me. However, despite all of this, over the summer of 2020, infection rates in the city rose to catastrophic levels. Leicester hit global news at the end of summer 2020, due to this higher-than-national-average infection rate. And even as lockdown restrictions eased in the June of 2020 for the rest of the UK, Leicester didn’t see restrictions abate.

So the question remains: how did Leicester’s R rate continue to climb when the rest of the UK's infection rate decreased?

The UK media focused on factories that willfully broke social distancing guidelines while flaunting health and safety laws. Some speculate factories in Leicester almost doubled their intake of staff over March and April to accommodate for online orders, garments being passed through six or seven pairs of hands before packing, and a lack of cleaners on factory floors.

However, the truth is more nuanced than that. And to understand how all of this was possible and how the infection spread so rapidly, we need to understand the sociological, historical, and geographical makeup of Leicester.

Leicester is a historic town nestled in the East Midlands. It’s close enough to Birmingham, London, and Nottingham for residents to consider a commute and, thanks to a lack of local employment opportunities, many do. Leicester’s landscape is shaped by the knitwear and hosiery industries. However, at the turn of the millennium, companies began shipping work overseas, where labour was cheaper, and many of Leicester’s factories closed. As a result, many Victorian buildings remained derelict and empty. What soon followed was rife vandalism and arson, leaving these shells of factories ready to be cheaply transformed to accommodate Leicester’s growing but transient student population. After all, they needed housing, shops, and restaurants. Thus, like many UK cities, Leicester’s gentrification had begun, making it a more affordable, commutable, and cosmopolitan alternative to London, Birmingham, Sheffield, or Nottingham. However, the issue of industry and work for long-term residents was swept under the rug and left addressed.

Leicester is famous for being the first UK town to have no ethnic majority, as in; it’s racially diverse enough for everybody who lives in Leicester to be part of an ethnic minority. In fact, in 2016, as a means of highlighting Britain's diversity, Channel 4 - a UK national television network - decided to hand the introductions of their shows to Narborough Road residents. Narborough Road is one of the UK's most diverse high streets, with shop owners hailing from 35 different nationalities and countries. This cultural diversity makes for a vibrant and tolerant cultural community. However, it becomes a weaponized reason why COVID-19 - a disease that has affected people of colour more disproportionately - took such a savage hold in this small Midlands town.

While Leicester’s largely rural county is littered with a well-spaced out, majority Caucasian population, the city centre is small and compact – hailing its shape from Leicester’s Roman and Medieval past. Higgledy-piggledy terraced housing, narrow streets, and tiny independent shops are common. And it is here - in the Narborough Road, Evington and Belgrave areas - that much of the people of colour live. And COVID-19’s stealth-like way of spreading from one person to another thrives in tightly knit cities. The social distancing rule of two meters is near impossible to adhere to in Leicester’s narrow but picturesque streets, The Golden Mile, and Europe’s largest covered market. So, it’s not surprising that Leicester suddenly had 10% of all positive Covid cases in the country. Popping to the local shop to fight for toilet paper entailed close contact with so many others. To make matters harder, some shops and take-out restaurants would not accept card payments - only cash - because it was damaging to their business. An unsurprising lack of trust with banks and language barriers are commonplace amongst Leicester’s diverse and transient populations – all the way through its bargain basement shops, spice markets, International supermarkets, Romanian bakeries, vegetarian Indian buffets, Chinese takeaways and Kurdish barbers.

LEICESTER'S HAS A RATHER RECENT HISTORY OF MONEY LAUNDERING, UNSAFE PRACTICES, AND POOR WORKING CONDITIONS THAT STRETCH TO AS RECENT AS 2014.

However, in looking at Leicester’s remaining factories, we quickly find that these small city shops are not the only issue.

Sweatshop conditions in China and India - where tales of child labour are rife, and exploitative health and safety stories regularly hit the news - should make us blush in shame at our high street purchases. We’d be forgiven for thinking this must only happen overseas and never in the UK – but how wrong we would be.

As previously stated, Leicester is a hosiery town, and unfortunately, garment making is often associated with poor working conditions. Only a glimpse through Victorian black and white photographs of clothes production reveal dangerous and unhygienic factories where men, women, and children laboured in Leicester. Furthermore, the town has a rather recent history of money laundering, unsafe practices, and poor working conditions that stretch to as recent as 2014. Throw COVID on top of this history, and we have a perfect storm for scandal.

Local garment factories supplied an illegal ‘cut and trim’ service for fast fashion brands - such as BooHoo and Select - where employees were paid below minimum wage and in cash. This tax avoidance is an endemic practice in Leicester’s existing textile industry, only occasionally coming to light in high profile crackdowns. BooHoo itself has seen a rise by 44% in online sales of loungewear over the pandemic. And in meeting the demands of online shopping and doubling staff intake throughout the pandemic, these unsafe attitudes persisted and employees were further exploited, putting their health on the line for money. BooHoo specifically has ordered an investigation around these Leicester sweatshops, which can change company names and duck under the radar in record breaking time. It was found that workers in Leicester who make clothes for BooHoo’s Nasty Gal brand can be paid as little as £3.50 an hour. That’s £5.22 lower than the national minimum wage.

RACE HAS BECOME WEAPONIZED WITHIN THE ENTIRE COVID DEBATE, AND THE RACE OF THESE FACTORY WORKERS HAS SEEN A SPIKE IN HATE CRIMES WITHIN LEICESTER OVER 2020.

So who works in one of these textile factories? Often, its poverty stricken, low-skilled workers, who may not speak English as a first language. Mostly, they hail from non-white backgrounds, who we know are an at-risk group. Most workers in these factories are migrants, who are either new to the UK or have been living in Leicester for many years and have been stuck in this rut of exploitation. The workers themselves become unable to move

into other positions, don’t have the flexibility for other employment due to family commitments, or believe that Leicester’s lack of employment opportunities - outside of hosiery - render them unemployable. Race has become weaponized within the entire COVID debate, and the race of these factory workers has seen a spike in hate crime within Leicester over 2020.

By August 2020, Leicester felt left behind as the rest of the UK began to open up trading again. Leicester City Council released a map that quarantined all of the city and surrounding areas. Interestingly, the diverse and ghettoized parts of Leicester grabbed media attention more readily than the predominantly white British areas of Oadby and Wigston that also saw increasing rates of infection. As restrictions and infection rates fluctuated throughout September, the boundary breathed and sighed, releasing streets in and out of quarantine dependant on rubbish collection days and postcodes. At one point, I could walk three streets and visit somebody in their house or meet with people beyond the rule of six. Three streets the other way, and non-essential shops were still closed, nobody could get a haircut, and fast food was takeaway only. This invisible but politicized boundary seemed more about race and poverty than about COVID. Furthermore, rules and boundaries chopped and changed so rapidly and so arbitrarily, it became difficult to abide by them.

As the UK's rate of infections began to rise in time with the winter flu and norovirus season, more restrictive measures were imposed upon the whole country. Pubs had a curfew of 10pm. Mandatory face coverings were introduced in all shops and restaurants. People were told to continue working from home. However, Leicester seemed forgotten – hanging onto restrictions and rules that barely made sense a month before. Overnight, I went from being allowed to socialize in groups of more than 6 in a park, to High Viz jacketed ‘COVID Wardens’ making door-to-door knocks to check that I wasn’t trying to hide my grandma under the patio furniture. My kids could go back to school, but they couldn’t have the friend - they’d spent all day sitting next to - over for pizza. By October, it was clear that the UK had ‘unlocked’ far too early, that whatever plans around track and trace had been prone to embezzlement, corruption, and mismanagement - ironically, a little like Leicester’s own garment factories - and more restrictive measures needed to be in place where infections were climbing ever higher.

The only clarity for Leicester was the tier system, which was introduced on 13th October 2020 – classifying areas as ‘Medium’(1), ‘High’ (2), and ‘Very High’ (3). Falling into a Tier 2 restriction, Leicester pubs abided by the 10pm closing, non-essential shops kept trading, schools remained open, and granny could come for tea, but only in the garden.

A minor blessing lingers over Leicester and COVID-19. Due to the restrictive - if baffling - nature of a localized lockdown, Leicester never really relaxed in the presence of COVID. As a result, the infection rates have lowered from 10% of all UK cases in July to being a Tier 2

restriction by October. I just feel sorry for cities that are now labelled as ‘Tier 3’, where certain ‘local’ measures become an addition to blanket restrictions, rendering the rules ever more confusing for residents and businesses alike.

Since writing this article, the UK government has announced a second month-long nationwide lockdown, rendering all non-essential businesses to close, individuals to not socialise with more than one person outside of their households, but for UK