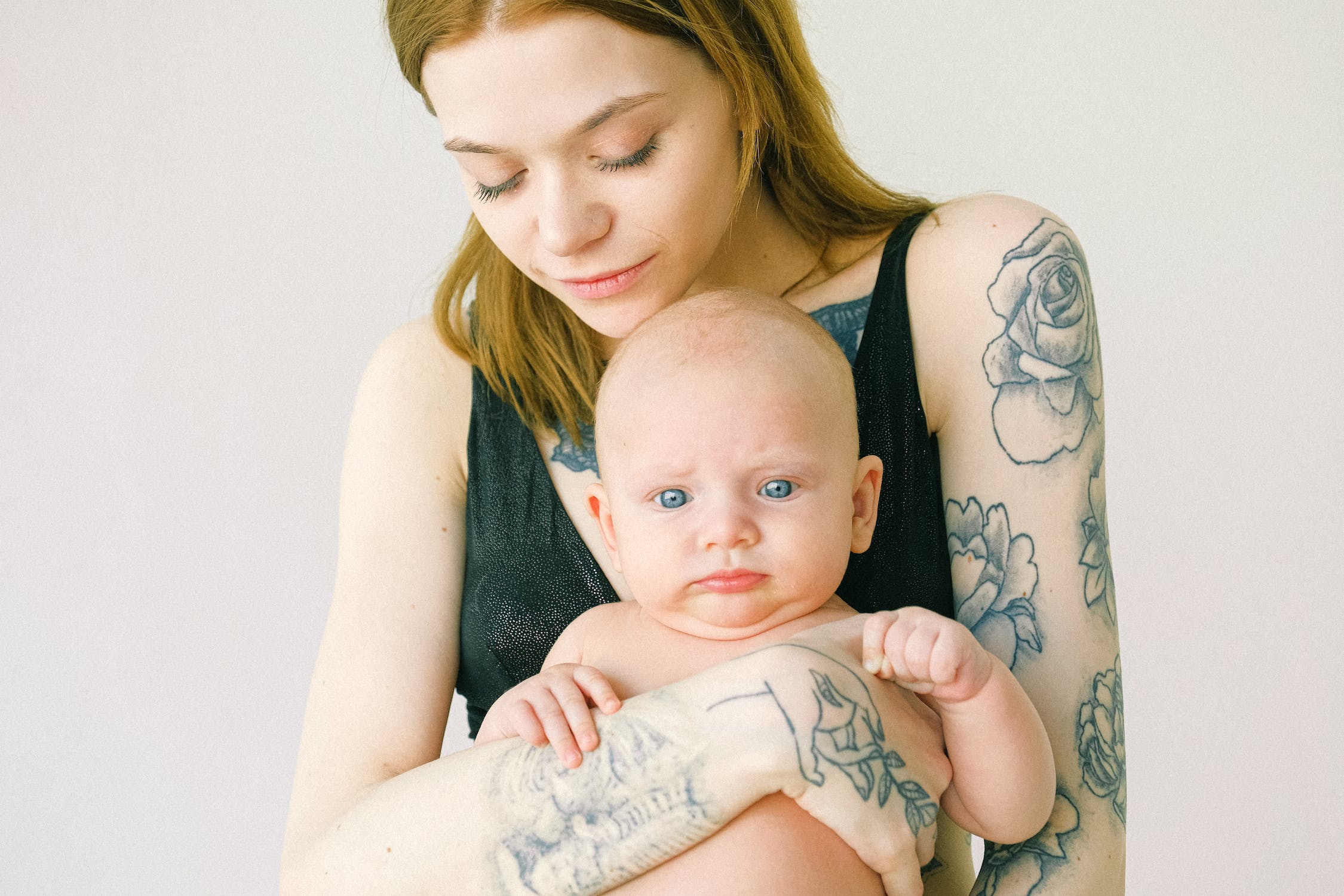 WHEN YOU SEE YOURSELF AS AN INTERSECTIONAL FEMINIST, BEING A MOTHER TO BOYS IS A PARTICULAR CHALLENGE. MOST OF MY ‘MUM FRIENDS’ ARE MOTHERS OF GIRLS, AND THE BLUEPRINT SEEMS STRAIGHTFORWARD: RAISE EMPOWERED, OUTSPOKEN, WITTY, AND CLEVER FEMALES WHILE ELEVATING THEIR SELF-ESTEEM AND OVERTHROW THE PATRIARCHY. RAISING BOYS IS DIFFERENT YET SIMILARLY COMPLEX.

I had my first child when I was 27. He was born on the darkest day of the year, when Rage Against The Machine’s “Killing in the Name Of” became that Christmas’s number one hit in the UK, as a protest against manufactured pop.

Months earlier, I’d attended a growth scan to check the health and progress of my unborn child, and the sonographer had asked if I wanted to know the gender. Having a baby’s gender revealed before birth is a relatively recent advance in technology. When my parents expected me, it certainly wasn’t an option. And in the moment of being told in that doctor’s appointment, I had no idea quite how it would be to raise a boy. Parents who raise their children in a genderless environment are awesome. However, parenthood, itself, can feel like a romp through Jurassic Park wearing Lady Gaga’s meat dress. It’s full of pitfalls, bad decisions, and guilt – as any Netmums post or pastel-coloured parenting blog will remind you.

Names became my first hurdle. The task of naming a person - giving somebody a marker to become their identifier, shape identity, and impact on a life in this way - felt huge in my mind. And for every nice, empowering, lovely, unusual and striking girl’s name, boy’s names were... boring in comparison. They ricocheted from ridiculous to biblical without any hint of irony. The lack of diversity spanning male names in many cultures wasn’t only a bit sad but a bit lame. This baby certainly wasn’t going to become a ‘John’ or ‘David’ - not that there is anything wrong with these names - nor was ‘Miracle’ or ‘Treasure’ on the list. Added to that is the extra complication of masculinity – what if a monosyllabic name like ‘Rock’ or ‘Flint’ had too hard an edge for his personality?

The baby came in a snowstorm. Fourteen days late and at five in the morning. Through a haze of hormone drips, anesthesia, and doctors warming themselves against the radiators of a clean NHS hospital. The lovely but firm midwives laughed at my grandiose birth plan of water pools and pain relief code words. They threw my typed and printed birth plan in the bin, concerned that pre-eclampsia, infection, and hypertension could set in before they blew up the birthing pool.

And after all of that, I was strangely ejected from the hospital within 24 hours and sent home with a baby boy.

When you see yourself as an intersectional feminist, being a mother to boys is a particular challenge. Most of my ‘mum friends’ are mothers of girls, and the blueprint seems straightforward: raise empowered, outspoken, witty, and clever females while elevating their self-esteem and overthrow the patriarchy. Raising boys is different yet similarly complex: empower individuality, embrace and celebrate softer attributes, steer away from toxic masculinity in its many forms, teach empathy and communication while also bringing down the patriarchy, capitalism and racism. Easy, right? Of course it’s not. But there’s an idea in place, however difficult to achieve.

An idea that goes awry when children start school.

My mum friend, who had banned pink clothes and Bratz dolls, warned me, but did I listen? Oh no – I knew better.

My snowstorm baby, born on the darkest day of the year, joined Foundation Stage 2 - aged four, the mandatory age to start school in the UK - amid “Frozen”-mania. The Disney film to redefine all Disney films, notions of romantic love, and femininity within the microcosm of Disney’s standards. It also had a song – you might have heard of it. Yeah, that song. “Let it Go” became THE SONG in all playgrounds the year my son began school. Every girl knew the words and sang it continuously. All games were Elsa/Anna themed. All the best toys had Elsa’s face on them. Yeah, there were boy-themed films and toys too, but nothing was as pervasive as “Frozen”.

And my son rebelled. Against “Frozen”, against school, against peers, and against all things ‘girly’ by his fifth birthday.

This made me have a think about masculinity, about being male, and about feminism. And the only conclusion I managed to garner out of Elsa’s song, “Frozen”. and the snowstorm baby’s reaction to it was this. In the simple microcosm of Disney, we have a mirror of what feminism has achieved over the past hundred and fifty years or so. Feminism, suffragettes, and women’s rights activists in the mid-twentieth century all worked tirelessly to reimagine, redefine and remodel what being female is. For example, Disney’s Snow White falls for a man who literally creeps over a wall and woos through song. (It’s so creepy.) Now, seventy-six years later, this is replaced with Elsa and her bad-ass song about accepting herself and her magical powers.

It made me think: how has masculinity changed? How has being a man changed in the last century? And the answer is men haven’t gone through the transformation in the same way women have. They’ve had no revolution, no redefining, and no reclaiming. This lack of transformation can manifest in anger, jealousy, confusion, and (finally, hopefully) desire – a desire to transform masculinity into something different, better, and constructive.

As he progressed through the UK primary school system, my snowstorm baby grew in both body and mind. And we began to discover he was physically and emotionally different to both boys and girls in his class, clashing with teachers who didn’t relate to him or explain their actions. He was popular amongst his male peers, taking on the role of ‘class clown’ and challenging authority. He seemed to relate better to male teachers than female ones - there were only two male teachers in a school of approximately forty teachers. At home, he was funny, erudite, witty, cool, and generally loving and pleasant to me, his dad, and his younger brother (more about him later). He chose to see a few friends outside of school and related and spoke to adults who ‘understood what he was interested in’ - mostly old computer games, “Dr. Who”, art, history, and cooking. When COVID banged its greasy fist on the school doors, he was physically relieved, and happy to revise art history at home and to never go back to primary school again.

Still though, the school was concerned about his behaviour and responses to authority. So we referred him to see a paediatrician - a children’s specialist doctor. After a long and fruitless journey of educational psychologists, doctors, and speech and language therapists, we didn’t have much more tangible than long hours spent in community paediatrics waiting rooms, endless zoom meetings, and a list of conditions to be crossed off ‘The Boy’s List’. No ADHD. No ADD. No Autism. No Aspergers. One educational psychologist - amid diagnostics and testing - simply presented us with an IQ test result, proving he scored far higher than she expected.

It seems unfair that boys who might not ‘fit in’ seem to be swiftly labelled as neuro-divergent. Why is this?

And my child had the privilege of parents who would push through the baffling and confusing list of experts, second opinions, and questionnaire forms. What about boys who didn’t have parents who could do this? What about boys whose parents might not speak English as a first language or have the time to keep going through the process of elimination?

And what about girls? Girls with neuro-divergent conditions find it far harder to fit into the rubrics for assessment than boys. Far harder because boys in our society inherently carry ‘the label’, and girls are ignored.

In the end, the snowstorm baby emerged from the COVID cocoon to his first day at secondary school. Some of his peers didn’t recognise him because his hair had grown so long in lock down and his legs too. Some of the kids in the year above refused to believe he was the age he said because of his deep voice and growing facial hair. He fits in well with secondary. Like Elsa, he seems to have embraced his ‘magical powers’ of being himself a little more without the shackles of primary school. Of course, I have those teenage years of difficulty to wade through now. But like most mothers of boys, we all have to do our best.

I’ve discussed this article - at the time of writing - with my snowstorm child. And he’s happy for his tale to be shared. And maybe for others to learn from his experiences of being a boy at primary school.

Raising Boys – Part 2 (The Easter Baby) will focus on the early years development of boys through the lens of being a mother to a four year old.