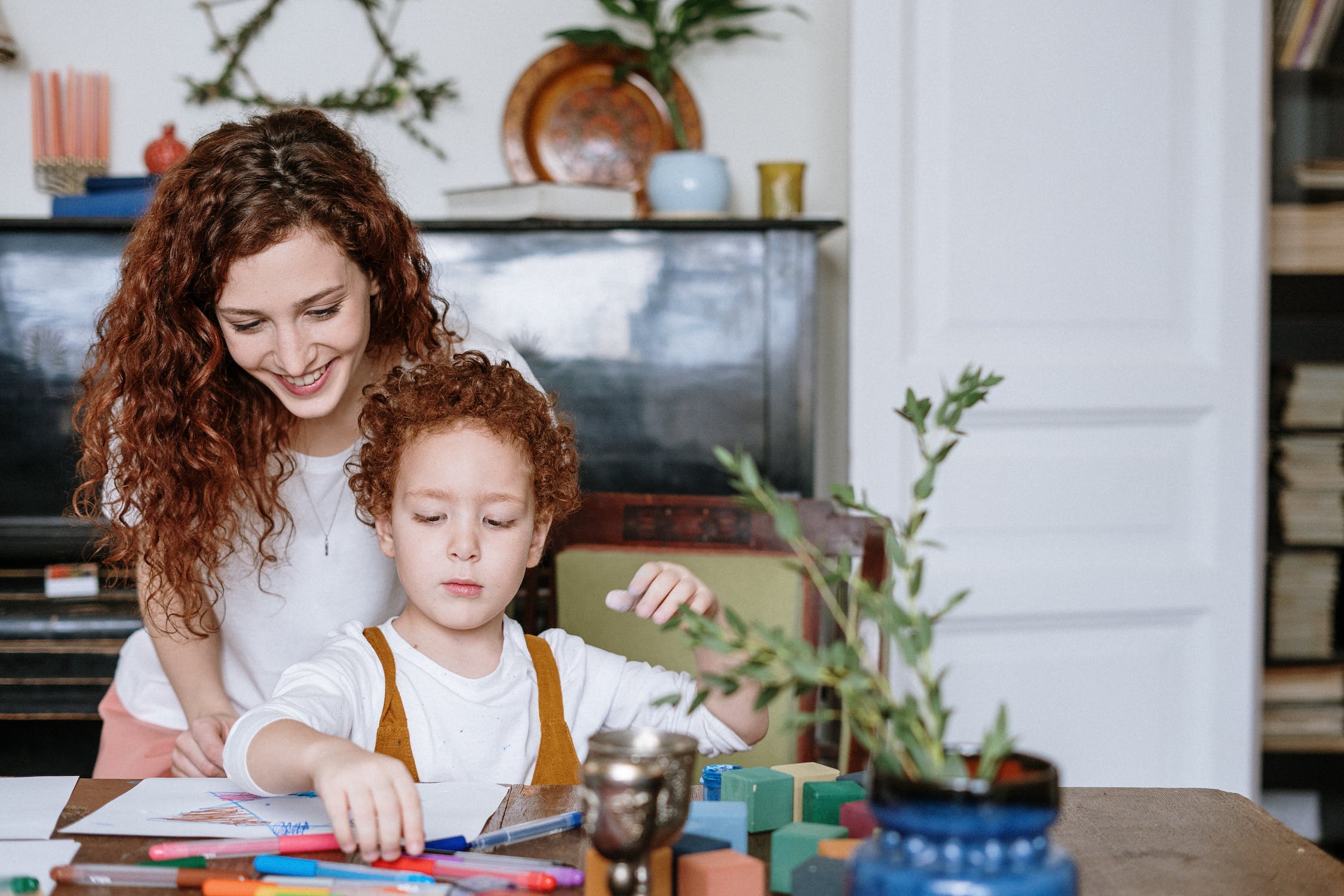 RAISING BOYS IS DIFFERENT YET SIMILARLY COMPLEX. RAISING SMALL KIDS IS HARD, REGARDLESS OF GENDER. HOWEVER, PARENTS CAN BECOME DISTRACTED WITH THE ADDED BURDEN OF RAISING... A BOY!

Today, my 4-year-old boy didn’t go to school. Thanks to COVID outbreaks, he’s spent all but seven days at home since the first day of 2021. This has been immensely challenging. Having a 4-year-old boy at home over the relentlessly snowy UK winter is akin to keeping a wild animal indoors, a wild animal with boundless energy, impulsive appetites, and a desire to push boundaries to near-fatal conclusions.

Most of my communications with other parents this year have come over Facebook messenger. Pictures of children - the same age as my son - doing school work and cosmic yoga, children enjoying walks in local parks and feeding the ducks, kids not understanding why the school hadn’t begun in 2021 but enjoying this extended holiday have littered my messages. However, my boy has always been a larger-than-life, destructive menace – and I don’t mean this in a nasty sense, but more in a literal one.

Since my 4-year-old has been on this earth, he has broken the following:

And this list of violence is only off the top of my head. I’m sure he’s broken more things around our house. After all, my little boy sees what his dad does and copies, verbatim. For example, he sees Dad up the apple tree, pruning its branches, and my son thinks climbing on the TV is just as viable a job. (Unfortunately for my TV - and the rest of my house - my ‘little’ boy is not so little. At 4, he’s in age 6 clothes with size 2 adult shoes, and that adds to my list of broken items.) Despite this, I do not think this behavior is a ‘boy thing’; my older son didn’t do this. Admittedly, however, things still got broken (jumping on his bed springs to mind).

I do note though that boys seem to ‘get away’ with the sort of everyday destruction that occurs with small children. Meanwhile, girls are seen as ‘better behaved’ or ‘less destructive’ than boys. Girls’ destruction, however, might be focused in different ways. I’ve heard countless tales of little girls ‘painted’ in Mummy's expensive make-up or ripping an older sister’s clothes by playing dress up. Little kids, regardless of gender, wreck things. It’s a given – but how adults react to said destruction and what they wreck seems to differ. This is purely down to socialization within the family and society.

One of the obvious things I’ve noted about gender differences in small children is the basic physical differences in anatomy. And this plays a huge role in none other than toilet training. Yes, the focus of all stay and play conversations. The obsession on every Mum and Dad’s mind. The ice breaker with parents you don’t know. The common ground of parenthood’s horror. The potty.

In short, girls get it quicker. They do. They sit, they pee or poop, and then the real troubles begin. Girls might do secret wees or dirty protests, but this is generally a sign that ‘something’s up’. They might get carried away playing and just forget, but this is brief. Girls like communal toilet time. They’ll follow a parent, a sibling, or friend into the loo and pee together or make polite conversation over the passing of a chocolate log. They’ll learn the art of a danger wee (or outside wee), wiping front to back, and naming all the different parts of their anatomy correctly, all by the age of 3! Girls are superstars.

Boys, however, have a different journey. Here is a list of the major issues with boys, willies, and pee (and poo):

Raising small kids is hard, regardless of gender .However, parents can become distracted with the added burden of raising... a boy.

When it comes to the relentless bursts of physical energy, more often than not, little girls will have daily moments where they focus their brains and energy. Girls under the age of 5 will have a moment - however short - where they play quietly by themselves, watch TV, or look at a book. Boys don’t do that until they reach at least 5 or 6. Boys will happily yell, climb, run, fight, scream, dig, destroy a trampoline or whatever from the moment they wake up until they go to bed.

Of course, my ‘science’ is purely anecdotal, but the old rhyme of ‘What are little girls made of? Sugar, and spice, and all things nice. What are little boys made of? Slugs, and snails, and puppy dog tails’ may stem from the fact that boys do not give their caregivers a single break. It’s well known that primary schools in the UK will try and separate cohorts of ‘boisterous’ and ‘unmanageable’ boys to allow teachers some respite. And according to the UK's National Health Service, 1 out of every 10 boys in UK primary schools are labeled as having a disorder. Meanwhile, only 6.6% of girls in UK primary schools aged between 5-10 have been identified as displaying learning difficulties. Clearly, these statistics highlight that emotional disorders are twice as common in boys as in girls. However, subsequently, girls are less likely to be diagnosed correctly. And then of course, social factors contribute to these numbers. But a little of me wonders how much of our school day is structured around kids sitting at desks being ‘good’ while imaginative play, exercise, and stories are sidelined? Once boys grow past the age of daytime napping - approximately at the age of 2 - it's all go-go-go, and this, in itself, is taxing. I wouldn’t become a primary school teacher, no matter how much they paid me – those people deserve medals and the OFSTED and OFQUAL off their backs.

Boys display a wide variety of characteristics: competitiveness, aggression, and anger - all from a very young age. These are all healthy emotions but can lead to some typical toddler-style moments.

However, when these characteristics are unchallenged and unchecked, we get ‘Karen-style’ behavior later in life: toddler-like tantrums about things not going an individual’s way. Piers Morgan storming off ITV because his relationship with Megan Markel was questioned, comes to mind. These behaviors seem particularly dominant in white middle-class men, dictators, ‘Karens’, and generally shitty people from all walks of life and genders. But boys, in particular, are impulsive, and genuine communication has to be teased out of their tiny mouths. If a boy is hungry, for example, he’ll grab a chocolate bar himself, rather than asking and running the risk of being told ‘no, have a banana’. This pattern of instant gratification seems innate in the male psyche. Historically, men’s toddler-like impulsivity and instant gratification needs have gone unchecked and has been reinforced by the patriarchy. Therefore, contemporary mums of boys have centuries of biological, historical, and sociological programming to undo. Being a mum of boys is hard, loaded with pressure and guilt from letting down all womankind. That’s immense.

‘Educate Your Son’ is a slogan that daubs rape and consent memes, and now, especially in light of the appalling Sarah Everand case, it oozes relevance.

On March 3rd, 2021, Everard was kidnapped and murdered by London police officer, Wayne Couzens, her remains found in Kent on March 10th. Three days later, peaceful protesters on Clapham Common - mourners for Sarah Everand - were forcibly disbanded by the London Metropolitan Police Force, prompting an outcry in the UK. And five days after Everand’s body was found, a controversial anti-protest bill leaped its first parliamentary hurdle, granting the police more powers to disband peaceful protests under characteristics of noise and public disruption. It is abundantly clear that the UK government is creating a ‘war on woke’, targeting 2020’s Black Lives Matter protests, anti-climate change protesters, Reclaim the Streets, and even those paying tribute to Sarah Everard by lighting candles.

All of this leads to two facts: women in the UK do not feel safe in public spaces, and women’s concerns are not taken seriously by our government or the police force. Women are abused by those who are designated to protect us. Therefore, ‘Educate Your Son’ seems a viable response to bringing men into this world, and it’s obvious that home life and society play a role in this education. But how? How do we undo millennia of social conditioning and biological impulsivity?

Here’s how: we need to educate our sons - both individually and as a society - that traits of toxic masculinity - impulsivity, aggression, intimidation, and competitiveness - are not okay. We need to change what the societal and emotional rewards for these behaviors are, and start by removing those who display these toxic traits from positions of power. We need to change what ‘being a man’ means, transform it from toxic to beautiful, from impulsive to gentle. We need to reward these changes on all societal levels: at home, in the classroom, in role models, as part of our curricula, in our art, in our sports. Fundamentally, we need to change our culture, our laws, and our punishments of deviance to extend towards a rehabilitation model for those toxic masculine traits. As Grayson Perry’s “The Descent of Man” states, men need to focus on their rights: “Men's rights: The right to be vulnerable. The right to be weak. The right to be wrong. The right to be intuitive. The right not to know. The right to be uncertain. The right to be flexible. The right not to be ashamed by any of these.” Although reinforcing this with a child as young as 4 seems like a drop in the ocean, it’s worth it. It’s a big job, and whether it’s one mother making a tiny difference in ‘Educating Your Son’ or educating all our sons by recognizing and attempting to undo the patriarchy, it is all one day at a time. As Chimamanda Ngozi Adichie’s 2014 essay and 2017 TED talk point out: “We Should All be Feminists” – we ALL take a global responsibility to ‘Educate ALL our sons’.

So, as long as my 4-year-old is home for the foreseeable future (over the time of writing this, my 4-year-old’s entire school has now shut, thanks to an outbreak of COVID) we can focus on reinforcing these traits that can’t be marked on progress charts or tested in a classroom. And I encourage all politicians, educators, celebrities, civil enforcement officers, medical practitioners, and parents to do the same. It might save a life, or my next TV.