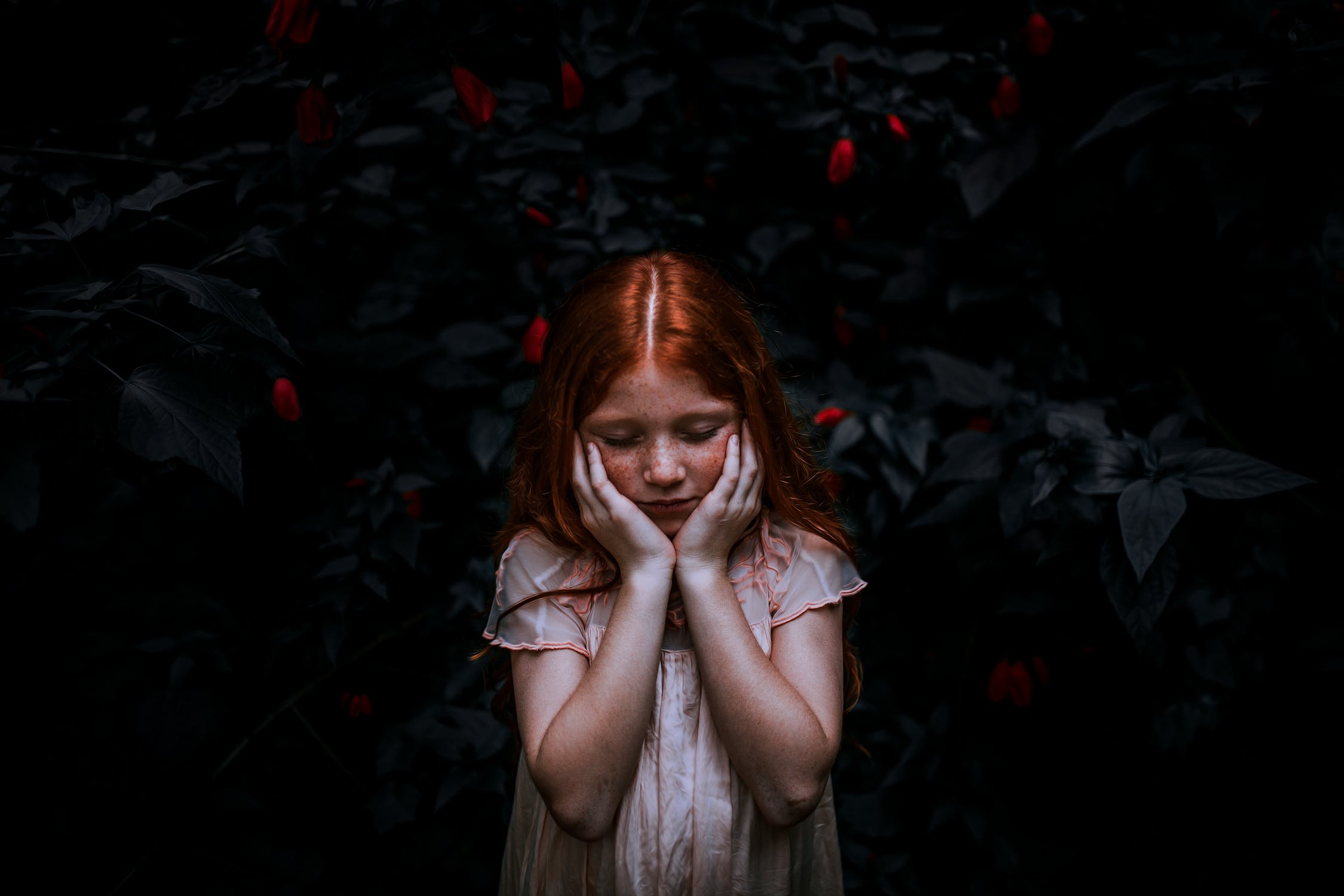 Last night I was called both fat and unattractive by two total strangers on separate occasions in a two hour time period at a Suicide Girls burlesque show. I know, alert the media, someone said something mean to me so I’m going to write a fucking essay on it.   I mention the type of show for pure irony, if you don’t know the Suicide Girls, they are an alternative nude modeling collective that focuses on trumping society’s normal view of beauty often highlighting curvy women and women that are heavily tattooed.   I went home after the show to my husband Chris and spent an hour sobbing so hysterically that the next day my eyes were almost swollen shut. These comments devastated me and shattered the little bit of self of esteem I had spent six months in therapy trying to rebuild. I’ve spent the last twenty four hours repeatedly hearing these comments in my head but hey, I should just get over it right? No! I don’t believe that at all and let me tell you why.

When I was a small child, a grown man molested me. When I was a 17 year old girl, a 50 year old man coerced me into sex and then blackmailed me to continue coming back. When I was 26 years old, I almost died from a mysterious illness that I didn’t even know I had. I know everyone has their shit right? What does listing all mine out for the world to view going to prove? I’ll tell you, all this is purely selfish, a form of therapy but I’ll share it with you.

IF YOU AND I ARE FRIENDS, I HAVE PROBABLY WONDERED AT SOME POINT IF YOU WERE ATTRACTED TO ME.

My self image from a very young age has been tied up in how others view me especially how they view me sexually. All I wanted for a good portion of my life (pre-therapy) was for some man or woman to find me irresistible. I don’t know if that’s just how I was hardwired or if it was a cause and effect thing from early trauma. I never really developed any passions outside of that, my life for a long time was all about the chase so to speak. If you and I are friends, I have probably wondered at some point if you were attracted to me. This was just such an automatic trained response for me, it didn’t even matter if I genuinely thought of you like that or not, I had to know. I spent a huge portion of my life living like this and it was exhausting, and it wasn’t fun and sexy, it always just felt so desperate. I thought to myself all the time that I wished I could just have normal feelings.   As you can guess, that’s led to some VERY unhealthy habits and relationships which I don’t feel I should justify by listing out, just trust me. After spending a good part of my life living this way I was tired, depressed and sick of lying. I sought out therapy begrudgingly and let me tell you it changed my life! I suddenly started to see the world different, I didn’t feel this constant need anymore. I began to develop my self value around the concept that I was a survivor, that I was strong. My therapist taught me that true value lies in the relationships you develop in a healthy way. Thanks to therapy my relationship with my husband and daughter became so much stronger, I let them both really love me for the first time. I finally let my husband in truly and we fell in love in the most amazing way, something I never really experienced. I stopped dealing with bullshit all together and cut the worst people out of my life. It sounds so rosy but it was a painful experience and I really forged myself in the fire but I would do it a million times over.

Another huge trigger around my image of myself has been my weight. I know, every girl ever has that as a trigger but before you start tuning me out entirely, let me explain. I got pregnant with Nola when I was 20. It changed everything about my body as it does most women. I struggled with those changes as again most women do. For Valentine's day in 2009, my husband took me to a burlesque show that changed my life. I met a woman who taught hula hoop fitness and was enthralled. I immediately went home and signed up for her class. A few months in I was hooked, hula hooping became my life. I slowly started to lose some of the curves Nola had left me with and chalked it all up to my hoop. Suddenly I was only 115 lbs! It was the smallest I had been in my life and to me I looked fantastic but something was off. My skin began to turn a dark tan without any sunlight, especially my hands. I was also exhausted and sick all the time, ending up in a hospital room every time a virus or bug came my way. I wanted to know what was wrong with me but every doctor I saw shrugged me off, one even tried to convince me that I was anorexic! Thankfully my boss at the time happened to be there when that particular shit head doctor cornered me and vouched for the fact that I ate a lot.

IT WAS A TOUGH PILL TO SWALLOW BUT AT THE SAME TIME I WAS SO THANKFUL TO FINALLY HAVE AN ANSWER.

In 2013 around Christmas, Chris and I moved back home to Murfreesboro leaving my beloved Nashville behind. I continued to be really thin, dark skin getting worse, and I was exhausted even crossing the room some days. For New Year’s 2014, we had decided to go up to Telico with our friends to stay at the cabin. The day before we were scheduled to leave I came down with what I thought was the flu. Chris and Nola went ahead without me thinking it would pass. Needless to say it didn’t. By the time Chris and Nola made it home I couldn’t walk to the bathroom without blacking out. Chris drove me to the emergency room, leaving Nola in the care of his mother who we were living with at the time. When we reached the emergency room, all I remember before losing consciousness entirely was screaming repeatedly “Why is no one helping me?”.

I woke up the next day in intensive care surrounded by my family with an i.v. directly into my heart and I remembered nothing. Slowly everyone started filling in the blanks for me. When I arrived in the ER I had such low blood pressure that they couldn’t find my veins, they had to cut my arm open and run the iv straight to my heart. My potassium levels were lethal and they were concerned that I was going into kidney failure. A young nurse working my case saw all the symptoms and saved my life by diagnosing me with Addison’s disease.   Addison’s disease is a rare, think one in a million, autoimmune disease that attacks and kills your adrenal glands, it’s signs are weight loss, darkening skin, and fatigue among others. The adrenal glands produce a life sustaining hormone known as cortisol and without it, I had begun to die. They told Chris had he not brought me in when he did I would probably have died in my bed. I spent seven long days in the hospital coming to terms with my new reality while receiving blood transfusions and fluids. It was a tough pill to swallow but at the same time I was so thankful to finally have an answer.

I COULD PROBABLY BE 115 LBS AGAIN BUT FOR ME THAT ISN'T REALISTIC.

Steroids were my key to living a healthy normal life and I began taking them daily. If you know anything about steroids, you probably know the number one side effect of steroids is weight gain. Over the last three years since my diagnosis I have went from my perfect little 115 lb body to 170 lbs, the biggest I have been in my life. Luckily eventually steroids even out and the weight gain stops, for me that stopping place is 170 lbs. I’m sure, as people are all too quick to point out, that if I became a slave to the gym or calorie counting I could probably be 115 lbs again but for me that isn’t realistic. I have a life to lead and I do make time for fitness but I refuse to be a slave to my weight. Steroid weight gain I have been told is even harder to lose than weight gain from other methods.

So what is the point of me telling you all this? Am I looking for sympathy? (NO! I actually have a fantastic life) Am I looking to justify the way I look or who I am? (again NO) I am writing this because I want you to understand something and please truly listen. I am not extraordinary, my stories, my experiences are not extraordinary, people go through these things every day. I want you to think before you speak. I want you to realize that the person you are judging or making fun of has their own demons inside doing it for them and those demons don’t need more fuel for their fire. Besides, does it make you prettier or skinnier or smarter when you hurt someone else? The people who said those things to me, even though it devastated me, I know deep down are just burning up with their own insecurities, hurts and fears. So to them I say, I’m sorry you are hurting. And to you I say, think before you speak, build someone up, be a brighter part of someone's day, be remembered for your kindness.