Demi Lovato: Dancing with the Devil 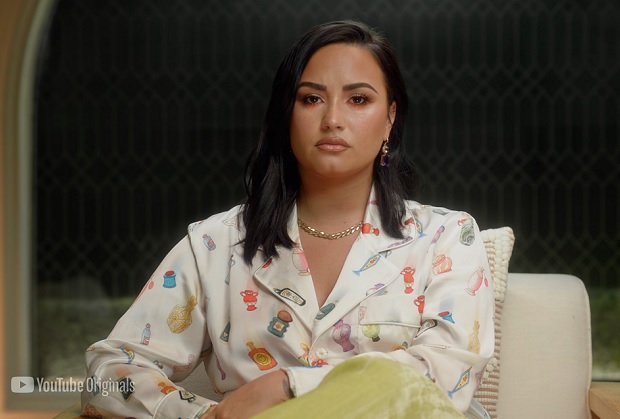 DANCING WITH THE DEVIL SHOWS THAT DEMI LOVATO IS NOT A BRAINLESS, LITTLE POP STAR WE MIGHT HAVE THOUGHT HER TO BE IN THE PAST. SHE HAS GONE THROUGH MANY PAINS TO GET TO WHERE SHE IS, BUT SHE IS NOT STOPPING HER JOURNEY ANY TIME SOON.

* This was written pre yogurt-gate

Thoughts going in: How bad can it be?

Thoughts coming out: That was worse than I expected.

“It's just a little white line, I'll be fine

But soon that little white line is a little glass pipe

Tin foil remedy almost got the best of me”

-lyrics from, “Dancing with the Devil”

The documentary starts. Upbeat shots of Demi from her “Tell Me You Love Me” tour flash across the screen. If you pay attention, you can see her slowly getting more and more tired, disenchanted, and unhappy. The montage ends. A final shot of Demi on the phone. Her mother’s voice on the other end happily says, “Things are only going to get better from here”, and the words “One Month Before Overdose” appear on the screen.

Even though we know the documentary is specifically about Lovato’s overdose, the shot, those words, this paradox, is chilling.

We can hide so much from the world.

But on July 23, 2018, Lovato could no longer hide her addiction and her pains. As the world now knows and the documentary reveals, the night of the infamous overdose, Demi’s body suffered through an insane amount of hits. And Demi lists them herself: three strokes, a heart attack, temporary blindness, asphyxiation on her vomit, and multiple organ failure. At present, she still suffers health complications.

The first lesson while watching: Demi was not fucking around with designer party drugs. This list, she gives like a confession: cocaine, oxycontin, crack, smoking and injecting heroin, along with smoking marijuana and excessive drinking.

When we hear that someone is a ‘junkie’, our minds tend to turn to the gutter. Crack? Little “Sonny With A Chance” was smoking crack?

Yes, the beautiful, bold, gilded Demi Lovato was into hardcore drugs, and she hid it for years.

A moving scene from “Dancing with the Devil” shows Demi crying as she is seated at a piano on a stage in March of 2018, and DJ Khaled is praising her as no less than a female Jesus for having six years of sobriety. The crowd is screaming their throats raw - impressed, astounded, and appreciative. Demi just puts her head down on the piano and is seen wiping her eyes.

Later, she confesses she was high on stage that night.

But that’s not all she confesses.

In fact, Demi doesn’t let the camera look away. At times, she is forceful with her eye contact, commanding that we listen. And watching, I got the sense that this is her public exorcism. She has to get it all out. She wants to cleanse herself and have no more secrets.

Other times, she gives off the air of a beggar: now can you understand why, why I did all these things?

The second lesson: there was more to the night of the overdose than the excessive drug use.

Demi reveals she was raped by her drug dealer. She was drugged, raped, and left for dead. As if this isn’t enough, she later goes on to say she was also raped at 13, losing her virginity to the attacker. So when we collectively wonder, why little Demi Lovato would smoke crack, she gives us the whole truth: multiple rapes, bipolar disorder, eating disorders, alcohol addiction, substance abuse, body dysmorphia, self-harm, fame, and rehab.

Recently, actor and comedian Dax Shepard said how hard it is to be the poster boy for sobriety, and throughout the documentary, Demi echoes this sentiment. She now calls herself ‘California Sober’, meaning she still smokes weed. And really, with all those drugs she was using before and after everything she’s been through - good for her!

“I’ll always be a junkie,” Demi declares. “I have to work at this every single day. With humility - This Is a very powerful disease.”

The documentary ends with Demi revealing in a new look and being open about her self-image and what she’s learned so far. “Life is fluid and so am I, and that's all I know.”

Overall, the documentary feels complete. Demi’s closest family and friends are there, giving us the real and otherwise unearthed truths of Demi’s experience. Even a few A-listers to pipe up - Christina Aguilera, Elton John, and Will Ferrell - to all speak movingly about Lovato and her experiences.

Demi Lovato is not a brainless, little pop star we might have thought her to be in the past. She has gone through many pains to get to where she is, but she is not stopping her journey any time soon.

Lacey lives in Northern California with her wonderful husband and children. Lacey is a freelance writer, jewelry designer and activist for women's rights and rape reform. Check out her website and follow her on her Instagram accounts @sometimeslacey and @dandylion_recycling