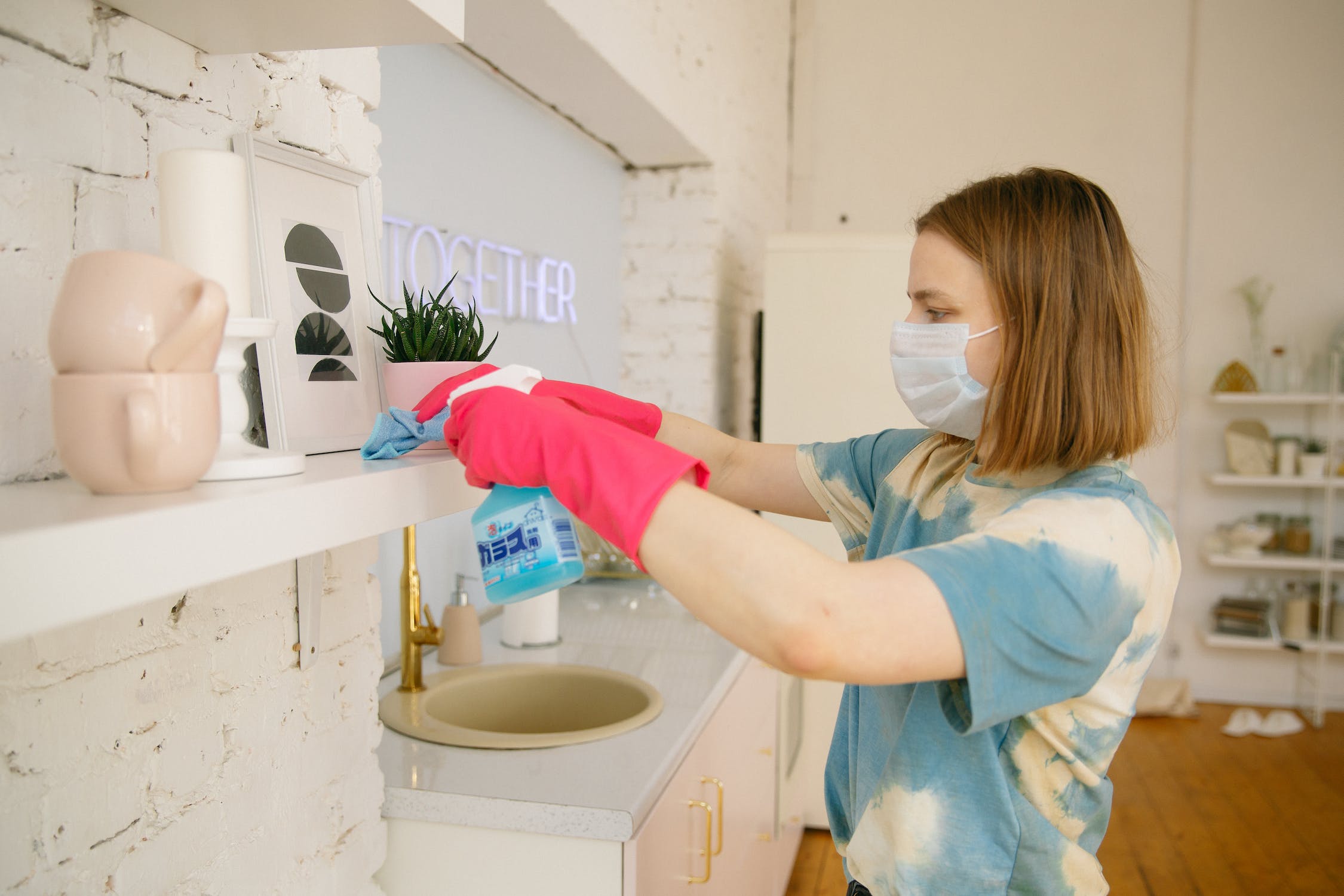 WHAT IS THE IMPLICATION OF "BITCH WORK"? IS IT HARD WORK? DIRTY WORK? WORK THAT WOMEN SHOULD HAVE TO DO?

When I was 19, I asked a 50-something year old yt man to clean a bathroom. He got so angry at me that for a second, I thought he just might throw hands.

His exact words to me were: “That’s bitch work. I shouldn’t have to do that shit”.

Standing there, biting my lip, my hands making fists into the sleeves of my black sweater, I calmly formed a response that wouldn't make a difference. I swear his face became a red sun, the words “bitch work” were spit out, venomous, sour. Each syllable so heavy with outrage that I felt literally taken aback. I expected it, but it still shocked me.

I suppose I should provide some context for the situation; I was working as a shift supervisor at a coffee shop. At the time, I was a Liberal Studies major and I covered my wrists in black punk rock bracelets and my fingers in chunky rings. I didn’t wear makeup except for thick, black eyeliner and mascara. I put my long hair in a high ponytail and worked on perfecting a smirk that permanently made me look like I didn’t play well with strangers. I pretended to be tough but it was all a facade. A cover for a girl that actually cried in public often. Those who knew me would just sigh a there-she-goes-again sigh and “there there” me until I stopped sniffling. (I seriously cried over everything. My best friend watched me cry while doing math on multiple occasions.) I wore way too much eyeliner for someone who cried as much as I did.

The thing is, this particular situation didn’t even make me cry. At the moment, I felt detached. Now, in retrospect, I feel an all-consuming rage when I think about it. I should have reacted differently. Why hadn’t I reacted differently?

When I asked this man to clean the bathrooms, it wasn't some power move; it wasn't some stick-it to-the-yt-man-plus-the-whole patriarchy kind of situation. It was simple. There were routines. Certain shifts completed certain tasks and he just so happened to be on the shift slot of a pre-closer, who was tasked with cleaning the bathroom before closing. As a young, latinx girl in charge, I was used to people not taking me seriously. Customers would look past me at anyone older (or whiter or male) even when I would assert that I was the shift on duty. “No, I wanna talk to her” they would ask, pointing to the older woman that worked nights there. She would shrug and point back at me. It didn’t enrage me as much as made me feel smug. I smirked and yelled “Have a great day” in a tone that emulated a crisp “fuck you”, mouthed behind a brittle, plastic smile that I was faking.

When I asked him to do this I wasn’t being bossy or rude. I wasn’t on some power trip. In fact, I remember being hesitant to even ask him to clean them. I remember considering doing the work myself to avoid the confrontation. I remember thinking that perhaps I was being unnecessarily paranoid and he would just understand that this is part of the job. It would be audacious for him to assume he was above that task, right?

Wrong. He did believe he was above the job. And he was not only audacious, but also an asshole.

Before we dive further, let’s deconstruct that statement that I have marinated on for so many years.

The first part: “That’s bitch work”. What is the implication of “bitch work”? Is it hard work? Dirty work? Work that women should have to do? Work that one deems to be beneath them? Work that one has filed away as work for “others”?

Then, then there is the shouldn’t

I shouldn’t have to do that shit.

I shouldn’t have to do that shit.

That shouldn't was dripping with privilege. That was not a word that was readily in my lexicon in 2010 when I was roughly 19 years old. I had a sweater that said “FEMINIST” in bold letters but I had bought it at some mall kiosk. At the time, my idea of the word feminism was very different from what it is today. It was Grrrrrrl power, spice up your life, late 90’s feminism. It was packaged, it was corporate. A feminism that is sanitized and can be easily consumed. The privilege that man had, not only to say that to me, but also to believe it. He believed that he should not have to do that shit. For a long time after, I wondered: Would he have said this to anyone that asked him to do that? Or was it because I am Mexican? Because I was young? Because I am a woman? Was it a combination of all of it? Who knows. I don’t know.

This man, though, he’s a cardboard cutout. I’ve come across this type so many times in my life, before then and since then. I would make the assumption that this is a type of man we’ve all come across. He slicked his hair back with some sort of smelly pomade and wore what I could only assume was that smelly cologne that came in a green glass bottle. Before he got hired, he was a customer- the kind that called me “sweetie” a lot. He once touched my lower back while I was stocking something and I didn’t even slap him. I just walked away to the backroom and got angry at myself. The problem is exactly that: I get angry at myself. Let me repeat that: I get angry at myself. They say and do these things to me and instead of being angry at them I'm angry at myself for not reacting the way I deem appropriate. For not standing up for myself.

I don’t remember what ended up happening that night. I assume that I ended up cleaning the bathrooms and just blocked it out. He never apologized. Nothing came of him saying that to me. He eventually realized that he wouldn’t just be given the promotion he wanted and he quit. So why? Why does this interaction still haunt me to this day? Why has my anger over these words been simmering over the last ten years? In the moment, it was annoying but weirdly expected. However as the years have passed, those words, that anger that backed them up, remain planted somewhere in my psyche. I like to think that I have become a different person since then. Perhaps the major difference is that today, I wouldn't drop it. I’d question him. I’d question him until he talked himself into a hole. If there is one thing I have learned is that when you question someone’s racism or sexism for long enough, they start to lose their righteousness. Because that is what happens with fallacies: they hold no weight. The difference is that I am no longer afraid of making moments uncomfortable for people. If people want to be shitty, I no longer make it easy for them to be shitty. It should feel uncomfortable to be shitty.

At the start of the pandemic, the first day we were asked to wear masks, a man I hardly knew said to me “you look sexy in that mask”. I heard the word sexy and cringed. But rather than get angry, I just pretended I didn't hear him. “What?”, I said, staring at him, a dead look in my eyes. He stumbled over his words and mumbled something under his breath. I blinked paper white eyes at him before turning to leave. I have changed since 19. I have changed a lot. I’d like to think that while that man was able to say that to me at 19 in that tone, with those eyes, that he wouldn’t say that to the woman I’ve become at 29. I’d like to think that I currently carry myself in a different way. I am no longer that facade of a tough girl that cries over spilt milk. (and yes, I have literally cried over spilt milk before. More than once).

I’d also tell that 19 year old girl to be more gentle on herself. There is no standard way to respond when someone says problematic shit to you. So no, I didn't have the perfectly crafted response when a hairstylist asked me what “nationality” I was while cutting my hair or the time some guy argued with me that I couldn’t be full mexican because “I was actually really pretty”. I’ve spent many nights being upset that I didn't have a witty retort in the moment. I balance it with the times that I have raised hell. With the growth and the work that I’ve done on myself. With the actual bitch work I have put into this bitch.

Recently, I treated myself to a good, long cry, like back in the day. But instead of fighting it, like I would since I was a kid, I gave in. I cried hard, alone, in front of my mirror while I got ready to go to my “dream job”. I cried and cried and cried and then I used those tears to wet my beauty blender. I cried and then covered it up and continued the hard work of forgiving myself for the mistakes that I still hold myself to. It’s work. It’s all work and it’s work I’m willing to continue doing.

Karl is a latinx woman teetering on the very edge of her twenties. She lives in Southern California and loves cats, cactuses, birthday cake and sour beers. She is first generation Mexican-American and interested in issues of identity, class, race, gender, mental illness, body positivity and interpersonal relationships. She is constantly brimming with detached, existentialist ennui. She also doesn't wear bras.