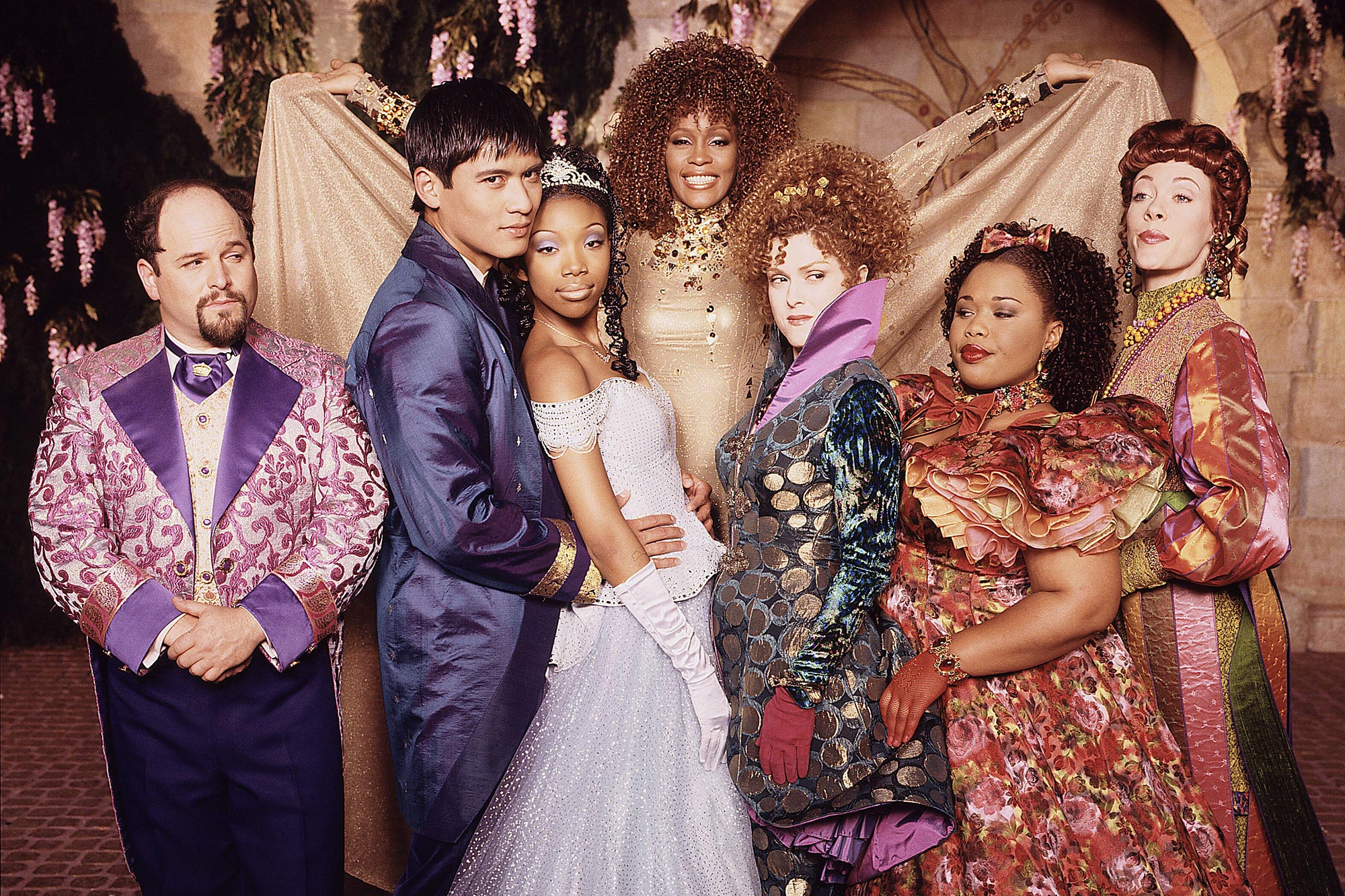 LIKE EVERYONE ELSE, I'VE NOW WATCHED THE RODGER AND HAMMERSTEIN'S 1997 VERSION OF CINDERELLA STARRING BRANDY AND WHITNEY HOUSTON, ABOUT A MILLION TIMES SINCE IT APPEARED ON DISNEY PLUS. DESPITE OWNING THE DVD, I HADN'T SEEN IT IN ABOUT A YEAR AND USUALLY WATCH BY MYSELF. WATCHING IT WITH OTHER PEOPLE GOT ME THINKING MORE ABOUT THE INTERSECTIONAL THEMES THROUGHOUT THE STORY BECAUSE MY ROOMMATES AND I TOOK THE TIME TO DISCUSS THEM.

One thing that should be noted is that while there are great intersectional and feminist themes, this movie doesn’t quite pass the Bechdel test. However, there are a few moments that could be argued as almost passing.

Cinderella’s interactions with other women are limited to her mother, stepsisters, and in a very brief scene, Queen Constantina. Each of these relationships are in direct relationship to a man and almost every discussion is based on that man. Cinderella’s stepmother only talks to Cinderella to tell her how her distain for her comes from the fact that Cinderella’s father died. She also insults Cinderella’s mother in the same breath.

However, there is a moment where all four women are seemingly getting along. It’s during the song A Lovely Night when Cinderella is describing what she imagined the ball would be like. The moment almost passes the Bechdel test because while they are all engrossed in the imagery of the ball itself, they are also making direct references to the prince himself. There are also moments early on where we can see Calliope and Minerva wanting to be friendly with Cinderella only to be stopped by the stepmother.

This is not to say that any of this is entirely a loss. The movie still brings a lot of feminist ideas to the table. Many of the moments that do went over my head as a child, and even as teenager. But watching it now as an adult there were several times when I found myself cheering.

The first moment occurs a few minutes into the movie during Cinderella and Prince Christopher’s first meeting. At a point in their conversation Prince Christopher states that women should be treated like princesses. Cinderella counters with “No, like a human being, with kindness and respect.” This simple statement takes apart not only the idea of Cinderella but every other princess as well. Princesses are thought of as idealistic women, put on a pedestal that doesn’t allow them much room to be complex and flawed characters. Over the years that has slowly started to change but because Disney dominates these stories, they still have to fit their standard.

Brandy’s version of Cinderella highlights the fact that treating someone like a princess is giving them a label that restricts who they can be. The fact that this statement comes from a Black woman is significant. Even within feminist and progressive communities, Black women are still put into certain roles. There’s the trope of the Strong Black Woman, and while that can be a great way to describe someone, it can still paint a picture of someone who isn’t expected to have tender moments or allowed to have flaws. This Cinderella lets you know who she is right off the bat.

The best example of the complexity of her character comes from the fact that while she is confident with her rebuttal to Prince Christopher, she later states that she is timid. And she’s allowed to be both confident and timid, in the same way she is both practical and whimsical at the same time.

While Cinderella is the main focus, her stepsisters also provide a critique of the way women are often constrained with their song titled Stepsister’s Lament which most of us will just remember as that part where the sisters are stalking Cinderella and Prince Christopher in the garden. While they are being catty, they also bring up quite a few good questions. My personal favorite line is “Why can’t a fella ever once prefer a girl who’s merely me?” While they are dragging Cinderella, they are also attacking the idea that men prefer women who they see as “perfect” instead of accepting who someone is in their entirety.

This version of Cinderella actually succeeds at making both stepsisters relatable and real, as comical as their characters may be. Just take a look at the comments section on any posting of the soundtrack on Youtube and you’ll see a slew of women agreeing with and relating to the stepsisters.

This song and moment brings to light how the way men pit women against each other through beauty standards is harmful, it makes us laugh and think at the same time.

In the stepsisters’ case it would have been easy to make their struggles about their bodies, to add an element of shame to their jealousy of Cinderella. However, this version of Cinderella takes a more nuanced route. It highlights how the sexism that women face isn’t always as blatant as we think.

One of my favorite things about this version is something I wish other movies would do. There is never an issue of race, the cast is diverse simply because it gave the roles to actors who could play the role. It wasn’t to create a layer of suffering for Cinderella, it wasn’t to make Minerva the lesser loved stepsister, and it wasn’t to “girl bossify” Queen Constantina. These characters are still allowed to function as they would if it were an all-white cast. No one woman has the responsibility of having to be a perfect symbol of Black womanhood.

If more movies and TV shows cast roles in a similar fashion, it would open the door for storytelling with much more depth. There’s a reason this version of Cinderella is so many people’s favorite. And for young girls watching for the first time on Disney+, it’s sending a message that who they are can be more complex than just a princess.

S.I.Reyes is a non-binary feminist who’s new to the writing scene but not new to the struggles of existing in a white male dominated society. They hope to one day use their Crim degree but for now settles for ranting on the internet.