On the Front Line with the Women Who Fight Back 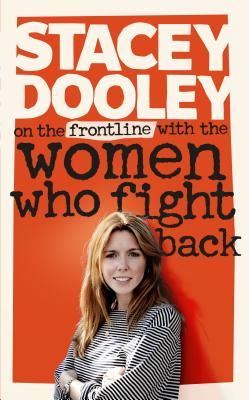 On the Front Line with the Women Who Fight Back 2018

STACEY DOOLEY CHRONICLES WHAT IT IS LIKE TO BE A WOMEN IN DIFFERENT PARTS OF THE WORLD.

A good book is one that not only evokes a lot of emotion, but one that also raises questions in the readers mind. Stacey Dooley’s ‘On the Frontline with the Women who Fight Back’ does just that. Dooley successfully raises important questions for the reader to ponder while telling us that the battles women face across the world are never black and white. Perhaps this is what a good book should do; show both sides and leave it for the reader to judge.

Stacey Dooley is an award winning documentary filmmaker from Britain. In this book, she revisits her series (Stacey Dooley investigates with the BBC) where she talks about her encounters with women in extraordinary situations around the world. In those documentaries, Stacey visits sensitive locations like Syria, and the US-Mexico border to document the situation with a gender lens. Dooley does the same with this book.

The book should come with a trigger warning for its readers as it contains potentially distressing content. From trans sex-work, drugs, abortion, and child sexualization, she talks about a range of issues concerning the women and girls who are at the receiving end of these struggles. The book features several bold and inspirational women, who despite facing these set backs are able to persevere with life. Dooley meets with these women to talk about their issues first-hand. In doing so she highlights important issues that are at the centre of the female experience.

Dooley asks a lot of uncomfortable questions. When drug cartels create havoc in society but also provide you with a livelihood, ‘is it immoral to collaborate with the drug cartels? Do you even have a choice?’. Or, for example, when mothers in the Philippines (a hub of sex trafficking) encourage their underage daughters to have sex with old men, ‘it is easy to hate these women and despise them. But isn’t it a privilege to be in a position to be able to have morals?’.

Dooley chronicles some of the horrific realities of Yazidi women abducted by ISIS and those in the country of Honduras, asking the question ‘What if your husband is mistreating you, the society tolerates it and you have no law and order in your region to protect yourself?’

This is the story of Heydi in Honduras, where domestic abuse is skyrocketing and the major cause of death among women is murder. Stacey meets Heydi, whose husband mutilated her body by removing her legs when she tried to leave the abusive relationship.

“While her two daughters watched, he went for her with the machete and hacked off one of her legs at the ankle and the other mid-calf, leaving her with two bloody stumps and a massive gash across one thigh. He made sure she couldn’t leave. She literally couldn’t walk away.” Such grim and bone-chilling details of the victims tear you apart and shake you to the core. These kinds of crimes don’t suddenly begin with murder or attempted murder but go hand in hand with domestic abuse. Stacey argues that “They start with psychological, emotional or physical abuse that leads to violent injury or death.”

When she speaks to the Heydi’s husband, he shows no remorse for his actions, rather tells her that his wife deserved to be punished because she dared to do something against the way society functions. Heydi’s case highlights the dire need for gender equality in the world today and how important it is to address the issues related to machismo, which ruin and destroy innocent lives across the world.

The book also tries to dismantle the negative connotation that is often attached to the word prostitution, while also raising awareness for the women who are stuck in positions of being forced to do it to survive. This is where we meet Alvora, a Russian call girl in Moscow who has a big sexual appetite and seemingly enjoys working in this profession, and Yana, a Syrian refugee in Turkey who needs sex work to survive.

Stacey summarises her experience meeting these women with, “It’s easy to have preconceived ideas about prostitution if you are a western woman who doesn’t sleep with men for money. But I think people would feel differently about sex workers if they sat down and had a conversation with them.”

This reminded me of Nivedita Menon’s Seeing Like a Feminist, where she talks about work associated with intellectual and manual labour and how the former has greater dignity and social respect than the latter. Menon questions, ‘Is a professor commodifying her mind when she accepts payment for teaching? And if so, why is this acceptable but not a woman commodifying her body parts to the clients who have sex with her?’ As feminists she says we should question how dignity and social respect are assigned to some forms of work and not to others.

The chapter on child pornography in Japan hit me the hardest. Reading about chaku ero (photographing teenage girls in provocative poses), the depiction of children in Japanese manga comics and the booming sex-doll industry in Japan felt like a revelation of Japan’s dark side.

On her visit to Tokyo, Stacey was amazed to see a huge number of sexualized images of children across the city. She says “They are everywhere you looked, from cartoon toddlers posing coyly in bikinis on enormous billboards to posters of flirty schoolgirls advertising house-hold items.” It’s ingrained in their society but not often talked about by outsiders.

Overall, Stacey claimed that the strongest women she met were the Yazidi women, who despite escaping the horrors of ISIS, grouped together to rescue and support others who were in their situation. After facing the unimaginable horrors of the Islamic state, I was not imagining Stacey to describe them as soft and kind. “The war hadn’t hardened them,” she writes.

While as a feminist in India I am aware of the status of women in the country, it is equally important for me to understand what it is to be a woman around the world today. And when you read these accounts by Stacey, you cannot help but sympathize and empathize with the women she meets. After all, what these women are facing is the result of the same old institution that spreads across the world irrespective of borders. Patriarchy.

Kritika is a Delhi-based Journalist. She is a feminist and passionate about writing on social and gender-related issues. History, travel, culture, food, and art are what excite her. You can write to her at kritika.ag1996@gmail.com. Follow her on Instagram and Twitter