‘Lipstick Under My Burkha’: India’s discovery of the female libido. 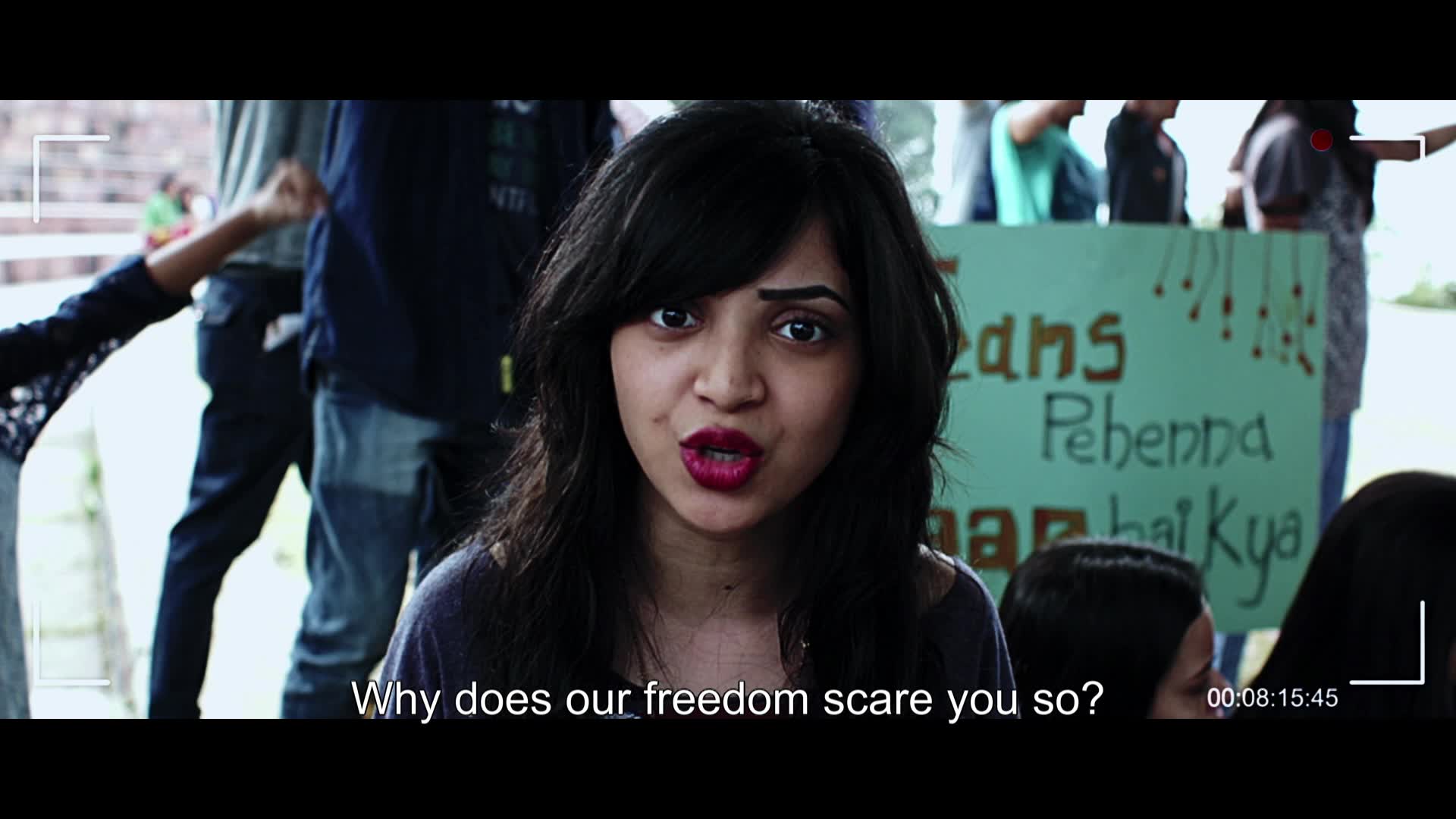 THE INDIAN FILM INDUSTRY IS INFAMOUS FOR IT'S TREATMENT OF WOMEN. OBJECTIFICATION, TOXIC MASCULINITY AND STRAIGHT UP MISOGYNY IS AS PREVALENT AS THE LACK OF ORIGINALITY IN BOLLYWOOD SCRIPTS. IN FACT, MOST BLOCKBUSTER 500-CRORE-REVENUE FILMS FEATURE HEALTHY QUANTITIES OF STALKING, HARASSMENT AND LACK OF CONSENT.

“... a heroine's chief job is to worship and adore, and get out of the way when the heroes come out to play”.

Bollywood is unique in including music as part of the story telling and notorious for the ‘item numbers’. ‘Item numbers’ are song-dance sequences which may or may not be relevant to the story, existing for the sole aim of objectifying women (aka ‘items’), an attempt at baiting men who otherwise might be tempted to watch a film for it’s plot.

This troubled relationship Bollywood has with women is only reflective of the role of women in ‘Indian culture’. Despite having had occupied several positions of power, the majority of women in India, much like their reflection in the movies, have never ventured outside the role of supporting characters. The Indian woman’s identity lies in her relation to men. She is allowed to be a daughter, a wife and a mother, but definitely not herself. It is to this throng of ‘item’ songs, glamourised stalking, and blatant sexism that director Alankrita Shrivastava released the film ‘Lipstick Under My Burkha’ (2017). A poignant narrative of four women and their reactions to the daily repression they face.

Set in Bhopal, a small city in central India these four women are not the quintessential female characters of Bollywood. These characters represent the roles Indian culture delegate to women: the daughter, the bride, the wife and the mother. Usha, an old widow, the acting matriarch of the community presents a dignified authoritarian figure, but craves for sexual intimacy and romance considered to be beyond the needs of a lady of her stature and age. Shireen represents the role of the wife who is used to satisfy her husband’s sexual needs whether consensually or not as well as to raise his three children. She works secretly as a door to door salesgirl and dreams of pursuing her career further. Leela is a young beautician bethroted to a respectable young man by her family. She represents the modern young women who have strayed from the set path, taking agency of her sexuality through her secret lover as well as with dreams of being economically independent. Rehana is a young college girl who feels suffocated under her burkha and her conservative family. Desperate to enjoy her youth through parties and alcohol like her peers, she sneaks out of her house, joins protests and even shoplifts cosmetics she is not allowed to buy. The covert and overt oppression these women face are displayed in a matter of fact manner completely devoid of the romance and fantasy Bollywood is known for.

‘Lipstick Under My Burkha’ won laurels across the globe, being chosen even as one of the official Hollywood Press Association Screening entries at the International Film Festival, Los Angeles. However, the Indian censor board, Central Board of Film Certification (CBFC) refused to certify the film claiming it was ‘lady oriented’ and fantasy ‘above life’. This lead to an uproar across the country with major faces of the Indian film industry backing Shrivastava and the film.

The director of the CBFC Pahlaj Nihalani, coming under major criticism and eventually being removed from his post, allowing the film to be released in July 2017, more than six months after it’s completion. This brought to light the inevitable contention between the role of women in Indian culture and their independent agency.

Curiously this film produced two concurrent scandals: one through the film’s radical depiction of women, and another created by the reactions of the conservative vanguards of "Indian culture".

Why was it a Scandal?

‘Lipstick Under My Burkha' was scandalous for multiple reasons. It represents a group of the Indian population that is most often left ignored and invisible. Though they are credited to be the backbone of Indian society, the lives and issues of the lower-middle class women are rarely seen in the Indian media. The vast majority of Indian films do not even include a mildly noticeable female character, those which do choose to focus on either the underprivileged or those of the upper middle class and above. Instances of everyday oppression of the majority of women are ignored for the more obvious discriminations at either the rural level (female infanticide and honour killings) or at the super-urban, corporate level (work place discrimination).

Though these women have basic education and the means of survival they lack any sort of autonomy, their entire lives dictated by their male relations or societal roles. Giving a voice to this particular group astonished the audience, being incredibly relatable. Almost everyone could see some aspects of what was shown in the film in their own lives and in the lives of women who are the closest to them. Thus causing the audience to question even their own activities and beliefs.

BOLLYWOOD BEING THE LARGEST FILM INDUSTRY IN THE WORLD RELEASES A RECORD NUMBER OF FILMS EACH YEAR, ALMOST ALL OF IT BEING FANTASTICALLY SEXIST, ENCOURAGING THE OBJECTIFICATION AND DISCRIMINATION OF WOMEN

This film struck close to the hearts of the Indian audience. However, more than the oppression the characters face, it was their reaction to it that shocked the audience the most. Female characters being represented as themselves with an autonomous identity and free of the Madonna - Whore lens was scandalous to an audience steadily nurtured on a diet of the glorious female sacrifice and suffering.

When CBFC rejected the film, the creators chose to publicise the reasons given for it. The idea that a film was not allowed to release due to it being ‘lady oriented’ and encouraging ‘female fantasy’ seemed ridiculous to the general public.

Bollywood being the largest film industry in the world releases a record number of films each year, almost all of it being fantastically sexist, encouraging the objectification and discrimination of women. In such a context the reasons given by the CBFC seemed nothing but blatantly misogynist and an unmasked attempt at preventing the expression of the female voice in the film industry.

Additionally, despite India having the second largest population in the world, conversations about sex curiously does not exist. Sex outside the sanctity of a religious, socially approved marriage is strongly condemned and those who are accused of it are often pariahed from society. Female sexual agency does not exist as neither does a female libido. At the height of controversy, all four female leads of this film possess strong and unapologetic sexual agency.

Leela’s on the other hand has taken charge of her sexual agency and refuses to conform to the ideal of the virginal Indian bride. Far more sexually experienced than her fiancé, she is forced to leave her boyfriend and marry for financial and social reasons. Rehana is unsure about sex but is extremely keen to partake in the activities her peers seem to be engaging in. This includes parties, alcohol and most importantly having a boyfriend, which are all things strongly forbidden by her family.

‘Lipstick Under My Burkha’ shows a side of women never before portrayed in Indian films. Not only does it show that women are interested, enjoy and are concerned about sex, but it shows the depth and the complexities of female thoughts on sex. Each character experiences sexual desires at different levels and each is strongly visualised in the film. Iconic with an audience to whom the idea that women may enjoy and even want sex is foreign.

However, what caused the most outrage and scandal was the complete rupture of order this film created even within the limits of cinemas promoting gender issues. Post the international condemnation after the Delhi rape and the city being titled the ‘rape capital’ of the world, Indian society has become far more sensitive to the condition and treatment of women. This reaction is fuelled and promoted by the manifestation of the fourth wave of feminism which lead to production of several female-lead/female-centric films in Bollywood. Challenging the traditionally held subservient position of women seemed to almost resemble a money making trend in the film industry. Films like ‘Mary Kom’, ‘Dangal’ and ‘Neerja’ portraying the lives of heroic Indian women. However, even these ‘feminist’ movies always maintained a certain level of politeness which ‘Lipstick Under my Burkha’ irreverently disregards.

The journey of female independence in films has always included some sort of male or societal support. For example, in the movie about the boxer Mary Kom, her husband, her (male) coach and eventually her father supported her ambitions. This was the first instance where female emancipation in Indian cinema did not have or seem to even want any sort male support or approval. This complete lack of concern for the opinions or the comfort of the male characters ruptures the order of society. Unlike other directors, Shrivastava did not seem to be using diplomacy in liberating her characters, but they seem to seize their right without any sort of apology or explanations to why they are deserving of their rights. None of the characters had any allies in their struggle. Though this is more often than not the reality in Indian families, it rejects the assumption that Indian society at a basic level cares for it’s women.

catalyst and plot points. This is the first time male characters exist solely in their relation to the women, as the strict father, cruel husband or love interests.

Much of the scandal which was created by the film itself, rather than the restrictions imposed on it, was mainly because it treated female roles as male roles are usually treated and vice versa. This completely overthrew the power structure of society trying to create a new definition of norms. And the CBCF’s attempt to suppress this was a failed reassertion of the powerful group.

Far more than the film provoking or inciting any social movements, it was a reflection of the current forces that were already present in society. The fourth wave of feminism having finally arrived in India conversation about women’s rights and treatment was slowly losing it’s taboo. This was the stage set for the release of ‘Lipstick Under My Burkha’. The Indian society was desperately craving for a release to explore the subjects presented by the movie. Female sexuality, agency and identity were concepts which were so far fetched the reaction to ‘Lipstick Under My Burkha’ was almost as bewildered as a child’s reaction when they realise their mother’s name is not actually ‘Mom’. Ironic that this was the film censured for being ‘fantasy above life’ in a film industry routinely featuring spirits, ghosts and talking cars (no we’re not talking about movies meant for children).

Previous movies which were supposedly ‘woman centric’ did not cause a scandal safely nestled within the comforts of ‘men giving women their freedoms’ rather than women ‘seizing’ their rights. ‘Lipstick Under My Burkha’ ensured that women’s rights and conversation with a strong female voice would not become a passing trend.

Leah Koonthamattam is a Master's student at Sciences Po, Paris studying International Security. She is passionate about politics and distracted by excellent protest culture. She hopes to combine her love for writing with her love for research to make the world a slightly better place.