The Language of DIY and Slogan T-shirts 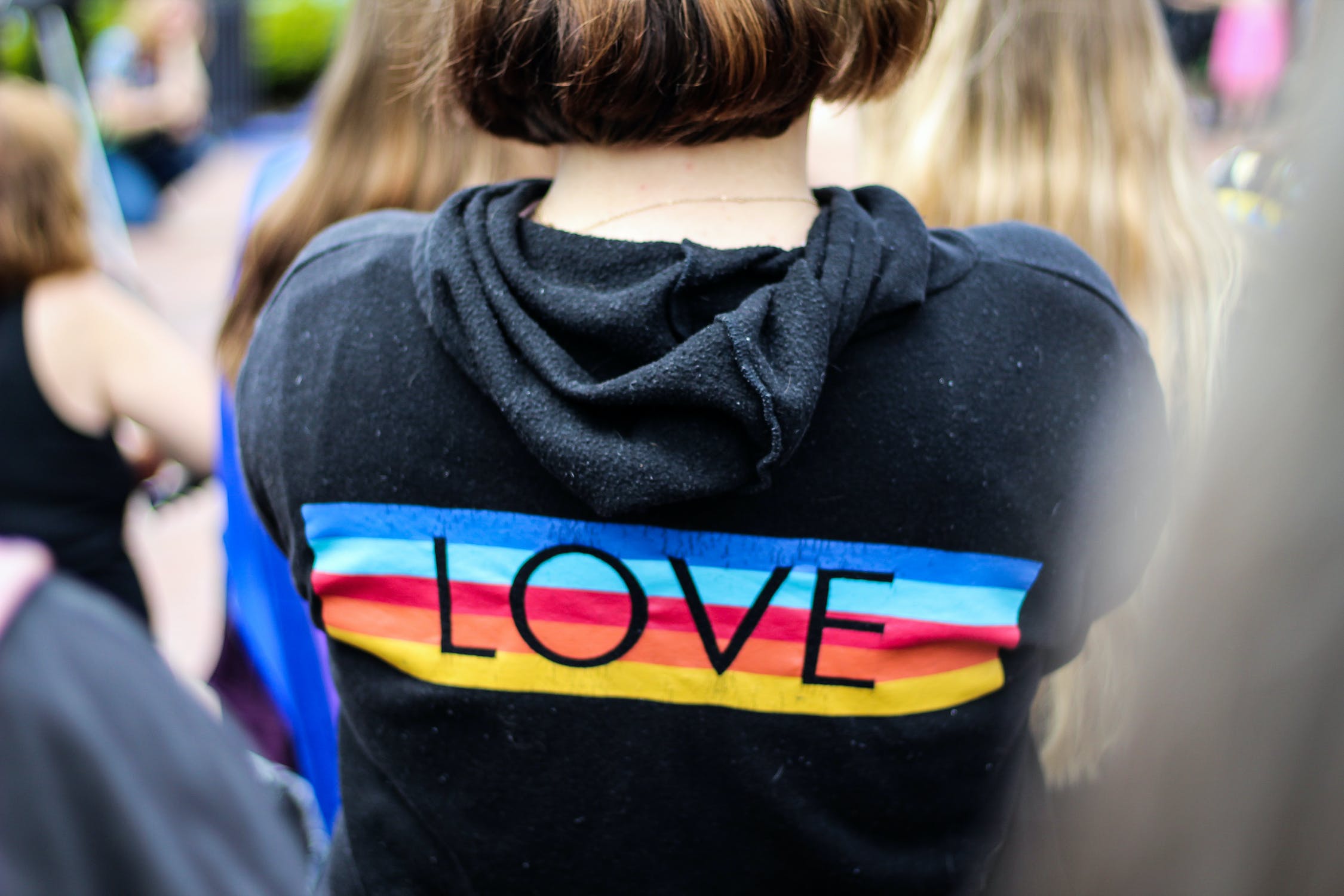 WHEN WE LIVE IN A CULTURE WHERE RUDENESS BECOMES A MODE OF DEFENSE IN THE CITY FOR WOMEN, A SLOGAN T-SHIRT MIGHT BE THE ONE THING THAT SAVES YOU FROM AN AWKWARD, HUMILIATING OR POTENTIALLY DANGEROUS INTERACTION BEFORE IT HAPPENS.

My generation was raised on a diet of ‘heroin chic’, Britpop and grunge. Women larger than a size eight were not allowed on television or in magazines, or at least that’s what it seemed like. T-Shirts are worn with pride and go through several life cycles. Worn for gigs, worn in the office, worn on sick days and then on a Saturday as you wash the car, go jogging or lie in bed.

The slogan T-shirt offers even more mileage – if it was a plain shirt, would it have been thrown out ages ago? The revolution of DIY T-shirts was imminent the first time somebody dip-dyed their own bare top and scribbled on it. If you can make one, you can make a whole bunch and sell them. In the era of Acid House, I tie-dyed T-shirts and sold them on a market stall for £3 a pop, hoping to gather enough cash together to buy (yet another) Manic Street Preachers album. This manufactured expression allowed for the freedom of not bothering with ‘flattering’ styles. The T-shirt itself is pretty standard if the wearer doesn’t have to think beyond the slogan.

WHO'S BUYING THIS, WHO'S WEARING IT? AND WHY DO I NOSTALGICALLY WANT IT?

If my good friends were to describe me, they’d say I clomp about in men’s T-shirts and boots, looking like a more androgynous Mortia Adams – too much comforting black, spray-paint-on jeans, charity shop work-shirts, band logos from far-forgotten eras. But one of my favourite items of clothing is the slogan T-shirt, a way to assert your inner feelings, thoughts and personality without having to speak. Their powers are twofold, drawing moth-like interactions to your slogan T-shirt flame or insect repellent for the less similarly minded. Either is fine. When we live in a culture where rudeness becomes a mode of defense in the city for women, a slogan T-shirt might be the one thing that saves you from an awkward, humiliating or potentially dangerous interaction before it happens.

Slogan T-shirts are supposed to be confrontational, to a degree. The idea of wearing your allegiance on your chest or back (or both) appealed to my pre-teen brain. At the age of twelve, one of my first (shameful) loves was the aforementioned Welsh rock band, Manic Street Preachers. Part of their appeal was how shambolically homemade these nice, white boys from the valleys looked. I admired their determination – Blackwood is miles from any decent shops. I could imagine them car spray painting cut-out letters from the Daily Mail to make cringe-worthy, silly slogans such as ‘Aesthetic Decay’ and ‘I hate Pop Music’ on their old school shirts. This freedom to create something a bit crap, a bit naff, a bit dodgy but fundamentally theirs seemed more important than the end-product looking shop-worthy. Of course, I took a leaf out of their book and created my own glittery, black-marker-pen-on-army-green Manics inspired T-shirt and was laughed out of school by the ‘alternative’ kids, sporting £20 a go Nirvana T-shirts a week after Kurt Cobain’s suicide. Now these T-Shirts – homemade, bootlegged and shop-bought – are classed as ‘vintage’ items on eBay and I am sick in my mouth a little as yet another tatty Nirvana ‘crack-whores’ or Manics ‘Gold Against the Soul’ T-shirt sells for an eye-watering figure brushing against the thousands. Who’s buying this? Who’s wearing it? And why do I nostalgically want it?

DIY has its roots in punk, but far before that, there were the Dadaists, an artistic movement hailing from Europe in the interwar years. Dada literally translated as ‘hobby horse’ – a nonsensical name for a nonsensical movement that prised making new objects out of old trash. These 1920s European Dadaists didn’t go so far as to literally wear their ideologies upon their bodies like punks did. The Dadaist idea that an individual could control the production and distribution of art minimises the gap between artist and fan. Punks took to this idea with gusto and applied it to the clothes they wore, the image they presented onstage, in mosh pits and on the streets. Any mere mortal could pull this off with a few safety pins, fabric scissors and your mum’s old pair of fishnet tights. It was possible to imitate Vivienne Westwood’s iconic punk style with a cheap trip to Oxfam, a blunt Rimmel kohl eye-pencil, an old T-shirt and a biro.

As punk’s light dimmed into the mid-1980s and other subcultures such as Goth, New Romantic and New Wave took over, the idea of iconic, but homemade, T-shirts to celebrate bands and adhere the wearer to the fan-base emerged. It became easy to spot your tribe and strike up a conversation if they had ‘Bauhaus’ plastered over their tits or torso. It became customary for bands to outdo each other with the commissioning of more and more outlandish and controversial T-shirts, inviting the wearer into a game of ‘dare’. Would anybody wear Cradle of Filth’s ‘Jesus is a Cunt’ T-shirt? Would anybody do their weekly shop wearing Coalchamber’s ‘Don’t Fuck With Me’ shirt? Even the mild-mannered, indie warblers Suede had their pink ‘GayAnimalSex’ T-shirt dropped from HMV for ‘lack of sales’ by the mid-1990s.

The more daring the design and slogan, and the more controversy it evoked, the more times the band’s name could hit papers. Wearers were doing the band’s marketing for them! Cradle of Filth’s Jesus T-shirt has instigated so many arrests, public outrage, bans on sales (even at their own gigs) and controversy – in 2015 a protester blacking out an exhibition of ‘that’ T-shirt in New Zealand – it eclipsed the band itself and their music.

Before he went missing in 1995, Manic Street Preachers guitarist Richey Edwards took slogans to a new level, slicing the words ‘4 Real’ into his arm during an interview with journalist Steve Lamacq and fundamentally ‘wearing’ the slogan skin-deep. This act required hospital treatment, seventeen stitches and was undoubtedly a cry for help from a troubled young man. In the early 2000s, Belgian designer Raf Simmons, created an entire line around Edwards and Manic Street Preachers, drawing heavy inspiration from their early slogans, homemade clothes and DIY aesthetic. This range of T-shirts, jackets and overcoats sported slogans, images, set-lists and quotations, demonstrating how DIY fashion from the underground can translate to the world of designer fashion. Kanye West wore a Raf Simmons jacket in 2014, sporting the iconic image of Edwards with the letters ‘4 Real’ slashed into his arm and caused massive tabloid and internet debates – who does Kanye think he is? Does Kanye even know Who Manic Street Preachers are? Is Kanye ‘4 Real’? Does it even matter?

Manic Street Preachers dropped the slogan T-shirts at the beginning of mid-1990s Britpop and draped quotations and catchphrases over their music videos and record covers instead of their bodies. Now there are Tumblr pages devoted entirely to categorising every Manics slogan. Their academic harvesting and creation of slogans translated, via their T-shirts, to their fan-base: ‘I’m so modern that everything is pointless’; ‘all rock and roll is homosexual’ and ‘Culture of Destruction’ could signpost one Manics fan to another. Just as the uniform of feather boas, army jackets, eyeliner and leopard print dictates that a Manics concert might be on, the T-shirts play an important part in the weird and wonderful subculture of Manics fans, as with fans of any other band. These slogans dictated a certain ideology, a pledge of allegiance to the underworld and a sort of test to separate ‘real’ fans from posers. Selling the Manic Street Preachers ‘All Rock and Roll is Homosexual’ T-Shirt to Bon Jovi fans is probably an act of super-defiance. Would Kanye wear that? Does it sell on eBay for a small fortune? Absolutely.

1994 saw Richey Edwards have a very public breakdown and hospitalisation, and a very public re-emergence onto the stage with an array of well-chosen but provocative women’s fit T-shirts. One of these, sporting a quote from poet Phillip Larkin’s This Be the Verse: ‘they fuck you up your mum and dad / they may not mean to but they do’ in neon letters, prompted stalls on Camden market to sell DIY looking T-shirts with literary quotations and pictures of lost artists and writers stamped all over them. One of my personal favourites is of Sylvia Plath with the lyric: ‘kiss me and you will see how important I am’, which I still wear for work – hoping a senior leadership team member will drag me into a disciplinary hearing for it. It’s not happened yet. Maybe I should opt for my Manic Street Preacher’s ‘who’s responsible’ (on the front) and ‘you fucking are’ (on the back), which has been relegated for bed only. Or maybe I should whack it on eBay and quit my job entirely?

One of the best homemade T-shirts I’ve ever seen was on a nine-year-old boy in Camden Town. This was in the early 2000s, at the height of Nu Metal’s commercialisation of alternative culture. In Britain, with our underground legacy of post-punk – even now, every Wetherspoons pub has a resident Goth, draped in black and Celtic jewellery – Nu Metal’s brash Hollywood glamorisation was deemed to be ‘inauthentic’ in many circles. Slipknot had released a T-shirt that read ‘People = Shit’, playing the ‘dare you?’ game with the wearer and riding high on the wave of a T-shirt that could be both provocative and confrontational, as well as appealing to pre-teen adolescents wanting to rebel in the most middle-class way possible. However, sticking the two-finger salute of authenticity up at Slipknot and Nu Metal, this pre-teen sauntered along Camden Lock in a plain grey T-shirt with the words ‘Slipknot = Shit’ scrawled in blue biro. One of the things that made me like the T-shirt (and the kid who had the guts to wear it) wasn’t the fact that the timing was so spot-on, or that it balked against the mainstream, but the simplicity and lack of finesse a biro-written logo conjured. Yeah, it would wash out and be wearable for one day. But that was the sentiment this kid had for today, and that’s what counted.